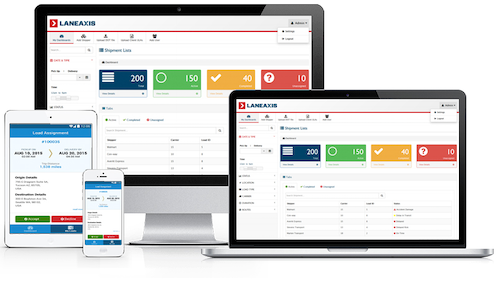 Almost 70% of all freight tonnage moved in the U.S. is transported by trucks, says American Trucking Associations, which says, “The trucking industry is the lifeblood of the U.S. economy.”

That said, “a large chunk of the trucking industry remains a fractured, phoned-in, faxed-out, paper-driven mess,” according to LaneAxis, self-described advocates of the trucking, transportation and freight logistics industries.

In an effort to wipe out layers of inefficiency plaguing the $700 billion industry, LaneAxis has introduced a Virtual Freight Management System “that gives shippers unprecedented end-to-end visibility and control over their freight. The desktop and mobile app delivers real-time analytics and insights that eliminate the need for error-prone manual reporting. By utilizing real-time Internet and mobile GPS data, LaneAxis renders obsolete old and unreliable trucking technology such as the Electronic Data Interchange (EDI) system.”

"Ninety-seven percent of the trucking industry is small and independent," says Rick Burnett, LaneAxis Founder and CEO. "That's over one million trucks, licensed DOT carriers in the U.S. There's no visibility into that network.”

He believes the cost-savings realized by making the trucking industry more efficient could ultimately benefit consumers at the retail level. The apps' ability to match shippers and carriers also benefits the environment by reducing the number of empty trucks ("dead-head loads") on the highways.

From medical supplies to food, the company wants “to help eliminate any delays in the delivery of supplies by ensuring that labeling is never an obstacle to getting critical items to the front line as fast as possible.”
NiceLabel
Apr 7th, 2020

The Nov. 1 flights included a delivery to a patient with limited mobility. Will the service boost much-needed healthcare access for rural communities?
Keren Sookne
Nov 7th, 2019