The CDMO plans the implementation of two more co-bots after a successful year-long trial. 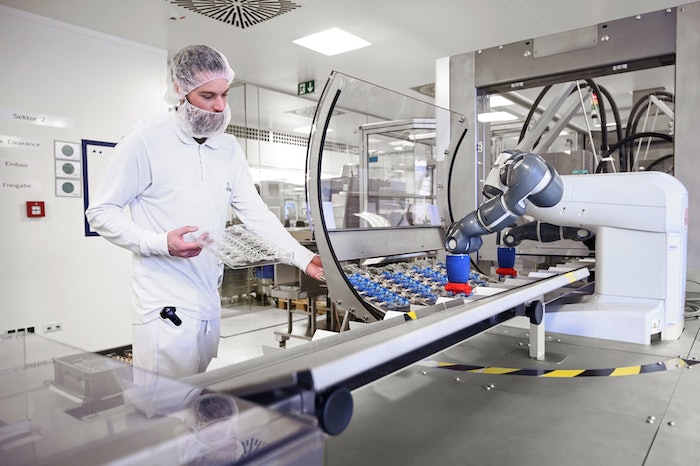 While large industrial robots work in restricted areas where humans are not permitted to enter during operation, collaborative robots provide close cooperation between humans and machines. In fact, at this year's HANOVER TRADE FAIR, collaborative work was featured as one of the central topics.

Vetter—a contract development and manufacturing organization (CDMO) that manufactures packaging systems such as the assembly of pens, autoinjectors, and safety devices—is using the collaborative dual-arm robot YuMi (You and Me), which has been supporting automated secondary packaging processes since 2018. By inserting finished drug products and components into folding boxes, it performs an important task with a high degree of continuity and precision. Employees supply its workstation with the required material and define its specific sequence of moves.

The company expresses that to ensure customers' high-quality standards, while at the same time offering a high degree of flexibility, in the future it will increasingly focus on collaborative work. Following the successful pilot project which included the use of the YuMi robot in secondary packaging, the company is now planning the purchase of additional robots.

The acquisition of collaborative robots has been enabling Vetter to meet the increasing demand for greater flexibility of its customers worldwide, says the company. The robot is also playing an ever-greater role due to the growing diversity in packaging solutions and the trend towards smaller batches.

"Fully automated systems allow fast throughput times and high quantities, but they lack flexibility due to long set-up times. This is exactly where our collaborative robot YuMi can make full use of its strengths," says Bernd Stauss, senior vice president of Production and Engineering. Its high level of flexibility is based on its operating concept and its user-friendliness, this permits a wide range of deployment options and fast adaptation to changing product and packaging requirements.

With the first collaborative robot now having been successfully deployed in a pilot project lasting more than a year, the company will be acquiring two more models. The first model will be used to assemble a prefilled syringe barrel with plunger rod and finger flange. After its successful implementation in secondary packaging, the second model will be used for what is known as speed-bin-picking in aseptic production where prefilled syringes are placed into trays after terminal sterilization.

Reed-Lane is a privately held company specializing in pharmaceutical contract packaging. Since 1959, the company has been creating innovative packaging solutions for leading RX, OTC, and generic drug manufacturers.
Jan 11th, 2014

PCI is afull service provider to global healthcare companies offering unparalleled expertise and experience in taking compounds from the earliest stages of development through to successful commercialization, delivering speed-to-market and commercial success for our customers.
Apr 2nd, 2013

Aphena invites you to learn more about how we provide clients with a full range of solutions to address their pharmaceutical packaging and manufacturing requirements.
Oct 20th, 2012

Unicep is a trusted partner in manufacturing and packaging oral and topical liquid consumer health care products including over the counter (OTC) products across many markets
Oct 20th, 2012

Learn why over 600 companies worldwide, including all the market leaders, rely on Almac’s comprehensive range of services extending from drug product development and manufacture through to commercial launch and packaging.
Oct 20th, 2012