Concerns about a carcinogenic impurity have prompted recalls of Zantac and generic versions of the popular heartburn medication. Smart labeling technology could speed and clarify alerts to consumers and also help drug companies reduce scrapped lots. 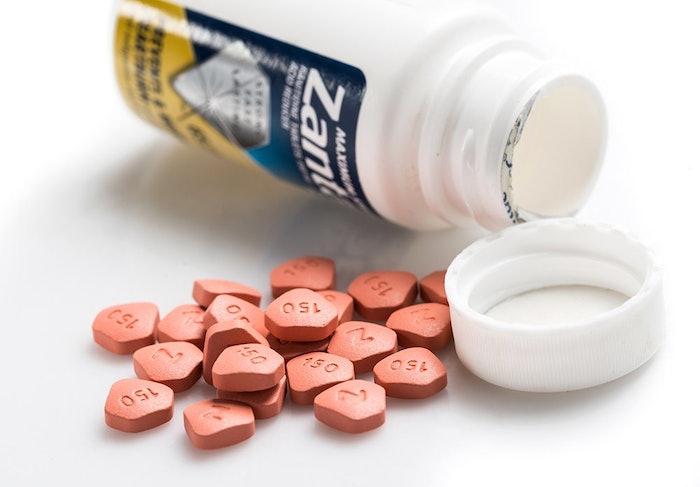 Zantac and generic versions of the popular heartburn medicine face concerns about contaminants.

Last month the U.S. Food and Drug Administration (FDA) announced that preliminary tests found low levels of N-nitrosodimethylamine (NDMA) in ranitidine medicines, including Zantac and generic versions of the popular heartburn medication. NDMA is a nitrosamine impurity that is classified as a probable human carcinogen. The FDA didn’t directly issue a recall—suggesting instead that consumers might wish to discontinue use—but drug companies Novartis and Apotex opted to recall their generic ranitidine products in the U.S., and major drugstore chains such as Walgreen’s and CVS pulled Zantac and other ranitidine generics off their shelves.

Such recalls can cause considerable stress on drug manufacturers’ supply channels. Getting the necessary information to consumers about which lots are affected and what they should do about it puts much of the burden on the consumer to be vigilant and diligent about checking lot numbers on their packages—perhaps either missing the announcement altogether or throwing away potentially expensive products that were not actually affected.

Smart label technologies could go a long way towards streamlining the communication from drug maker to pharmacy, insurance provider or doctor, along to the patient, according to executives at LocatorX, which specializes in tracking products through its integrated tracking, validation and security platform. Certified QR codes on the drug’s packaging would make it easier not only for the manufacturer to maintain insight into its supply chain, but also for it to know where the product has moved on in the distribution channel.

“By securely recording a product’s journey from manufacturer to supplier to consumer, a company would be able to locate that item’s last known location and prevent stores from stocking it or prevent a consumer from using the product,” says Pat Pickren, Vice President of Product for LocatorX. “Consumers will be better able to know if their product is affected—instead of a blanket recall statement, they will be able to scan the item and know with certainty that it is safe or unsafe to consume.”

This is a far cry from the several steps necessary in traditional recall practices, according to Pickren. “Utilizing certified QR codes, the wait time between issuing a recall and alerting consumers is significantly shortened,” he says. “Depending on the infrastructure in place, consumers can be notified via an app from their insurance provider, the developer of the medicine, or even their pharmacy. This could take the form of a push notification, alerting the consumer they may have a recalled product in their possession. Once the consumer is aware, they can then scan the product in question and receive official confirmation of the status of their item. Additionally, they can be alerted of next steps—how to dispose of the item properly and procure a replacement, for example.”

As the Zantac/ranitidine story develops, there has been some indication that the testing method used by the initial third-party laboratory used higher temperatures—a method that generates very high levels of NDMA. Testing is ongoing with the preferred methodology, with the FDA promising to provide more information as it becomes available. With new developments, QR codes could also be updated, providing consumers with the new information.

Next-generation labeling technologies also provide drug makers increased insight into their product batches, enabling them to determine with more certainty where the contaminant came into contact with the product, Pickren notes. “Depending on how the manufacturer implements the certified QR code, the event log can securely register every transaction with a date, time, and location and keep record of who has interacted with the product,” he says.

This leads to a more accurate timeframe of which portions of batches or lots could be affected. “With this technology, they will have a finer-tuned array of information about each individual product,” Pickren says. “If a company instates a policy in their Good Manufacturing Practices that requires each item to have a date and timestamp of when it was produced and who interacted with that production, they can pinpoint more accurately which specific products had been affected during the recall.”

This beats the costlier route—for both the drug company and the consumer—of condemning entire lots of medicine to be thrown out. “Currently, when a recall occurs, manufacturers are generally required to toss both the lot affected and the lots surrounding it in production on either side,” Pickren explains. “With this technology, they would be able to more precisely narrow down the window in which this occurred and limit the recall to a much smaller amount, salvaging more of the product and resulting in less product loss.”

The goal is to bring safety and transparency to the vaccine distribution chain and guarantee fairness and correctness. Emidio Zorzella, President and CEO of the Group: 'The pandemic has accelerated the adoption of new technologies'.
Antares Vision Group
May 13th, 2021
More in Traceability/Serialization