With the serialization deadline approaching, Sovereign Pharmaceuticals implemented open-source software that allows the company to make their own changes and improve packaging efficiency. 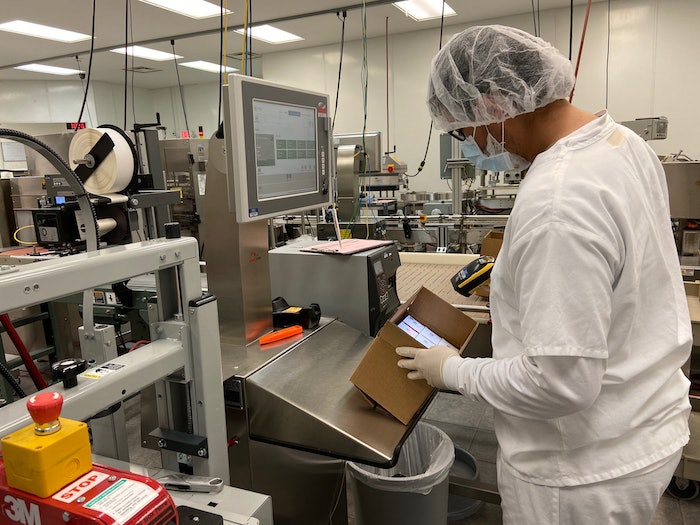 Sovereign implemented serialization and aggregation on all three configurations of packaging lines at once.

Sovereign Pharmaceuticals, LLC is a CDMO specializing in small-batch prescriptions drugs, packaging solid and liquid products in their Ft Worth, TX, facility. They handle a variety of bottle sizes—from 50 cc up to 950 cc and from 1 oz to 16 oz—for a number of drugs and indications. Dealing with several virtual companies for clients, they spend a lot of time educating them about regulatory requirements.

In 2016, the company sought a serialization solution to meet the DSCSA enforcement date in Nov. 2018. While they were driven by regulations, meeting the deadline appeared it would be a challenge. “We tried one solution and our customers tried three other solutions and none of them were going to meet the deadline,” says Ryan DeSario, Serialization Supervisor at Sovereign.

L4 connectivity proved to be an obstacle with the approaching deadline. “In February 2018, we received our equipment and we’d been working to make the connections. It was supposed to take six weeks but by the end of July 2018, we were still working on the connection,” says Paul Hafey, President and CEO at Sovereign. 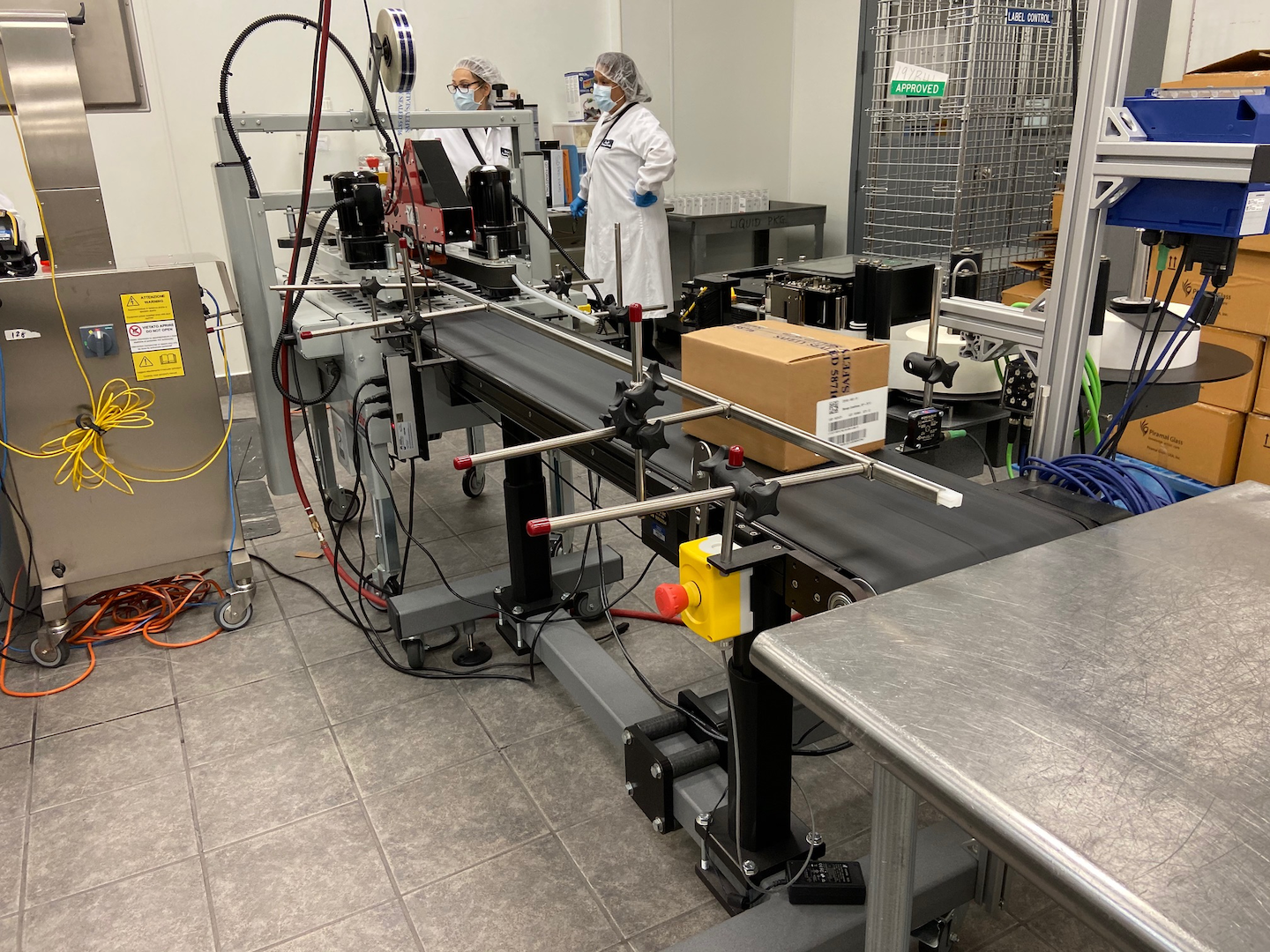 Sovereign had Antares hardware designed for small manufacturers with ID Technology pieces installed. “All of that worked and communicate with each other and sent numbers through the system,” explains Hafey. “The Antares system has the ability to create its own serial numbers, but the issues we were encountering were pulling serial numbers from our customers using a L4 to send the serial numbers into our system and then sending the aggregated serial number back to our customers L4 via EPCIS.

“We were already working with Vantage Consulting Group—they’d helped us with our equipment. When we started having trouble making connections to our customers’ L4 systems, they asked if we would like to try QU4RTET which is an open-source program. Vantage was an early adopter of QU4RTET and was familiar with integrating it,” says Hafey. “They said they could get the connections in place by the November 2018 deadline and they did.”

QU4RTET provided a cost-effective open-source L4 system allowing Sovereign to connect with trading partners like Tracelink, rfXcel, and SAP systems. With an open-source platform, Sovereign “owns” and implements the system, and can add the features it wants.

Implementation of QU4RTET began at the start of August 2018 and took about four to six weeks for Sovereign to connect to partners who were prepared. The pair note that some customers were not as up-to-date on the regulations and requirements at the enforcement time. Hafey explains, “The advantage was that the Antares hardware with the QU4RTET software allowed Sovereign to handle the DSCSA requirements for those clients while they selected an L4 system. If they wanted to use a different system, we could dump all the serial numbers to them once they were connected.”

“A lot of our challenges that we experienced came from the beginning phases of the L4 data exchange,” says DeSario. “Most of these issues occurred because of how new this was to the industry and we were still learning.” 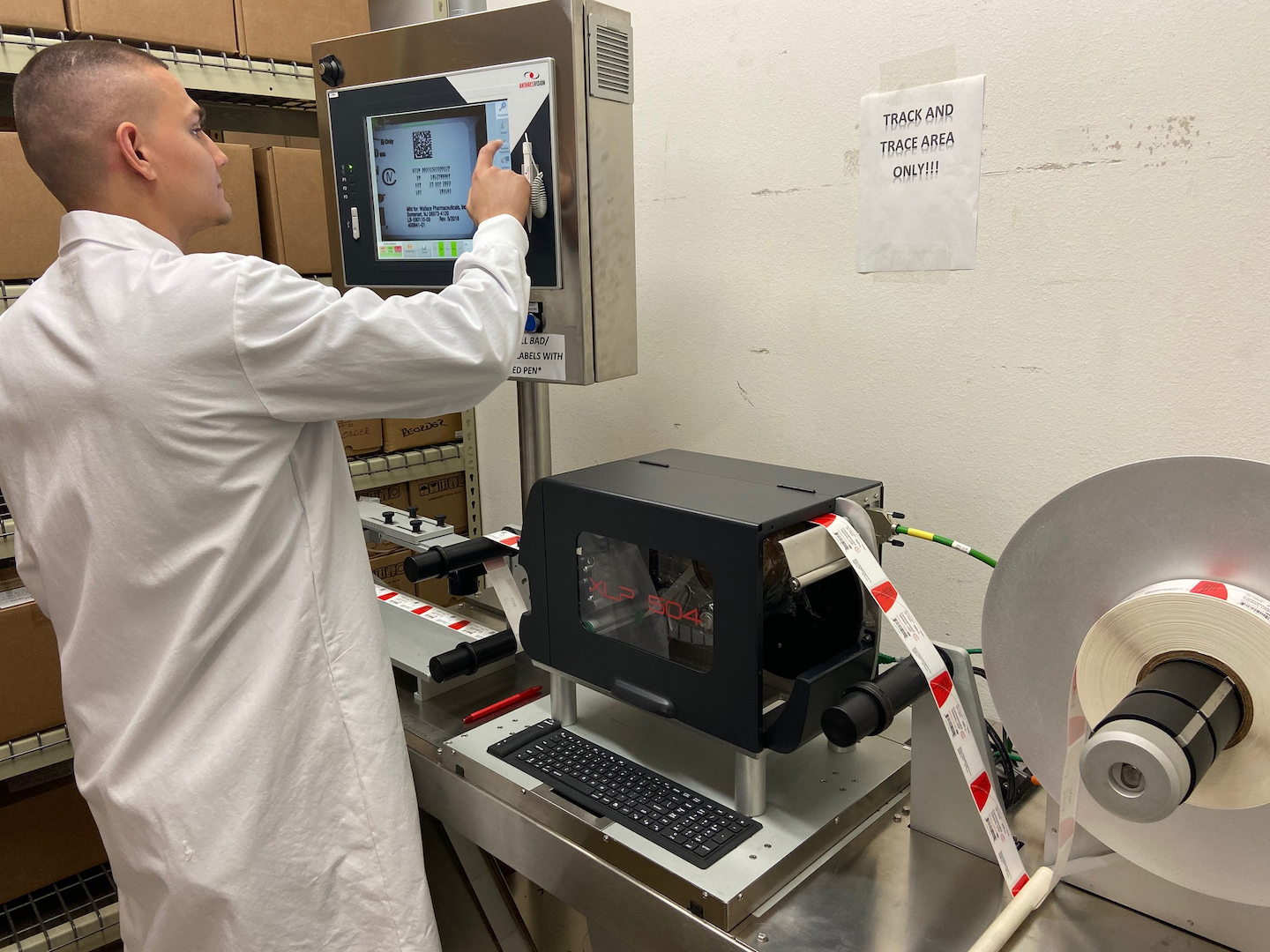 “Before serialization we had a very manual packaging operation. We now have become semi-automated and with that, we’ve sped up about five to 15% on our line as opposed to a lot of people who have said they’ve taken a cut."-Paul Hafey

Lesson learned along the way

For one client, Sovereign tried repeatedly to send the aggregation data of the serial numbers, but the operation kept failing and they couldn’t figure out why. The client’s consultant failed to tell them that even though they had six warehouses, they’d only set up one warehouse in their sandbox.

“We were sending it to the warehouse that we normally do, and it just continued to fail,” says DeSario. “That consulting group left and the next consultant came in and the very first thing they said was, ‘Why are you sending it to that warehouse? That’s not in our sandbox.’ As soon as we changed the GLN in the sandbox, it went right through the very first time we sent. So everything was actually confirgured correctly it was just communication and ensuring that we had all the right information from our clients. That back and forth went on for three months.”

Sovereign implemented serialization and aggregation on all three configurations of packaging lines at once. As Hafey notes, “We’re completely aggregated. That was one of the suggestions of Vantage … when we got the enforcement discretion in the first year; we weren’t initially going to do aggregation. But we could see it was coming down the road, and since we had the year to get everything in place, we decided to add aggregation.” 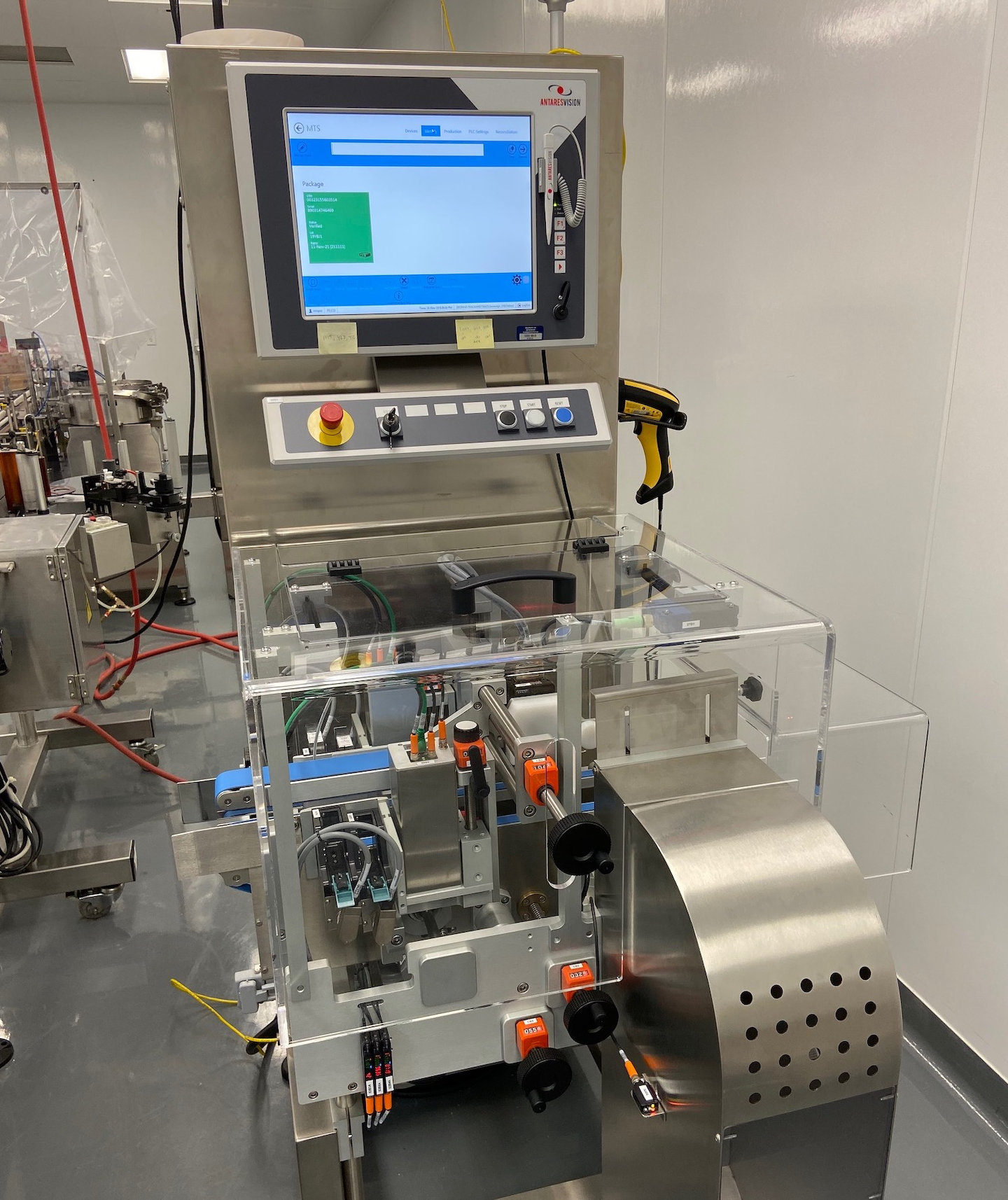 They were able to begin by Nov. 27 2018, aggregating bottle to bundle, bundle to case and case to pallet: 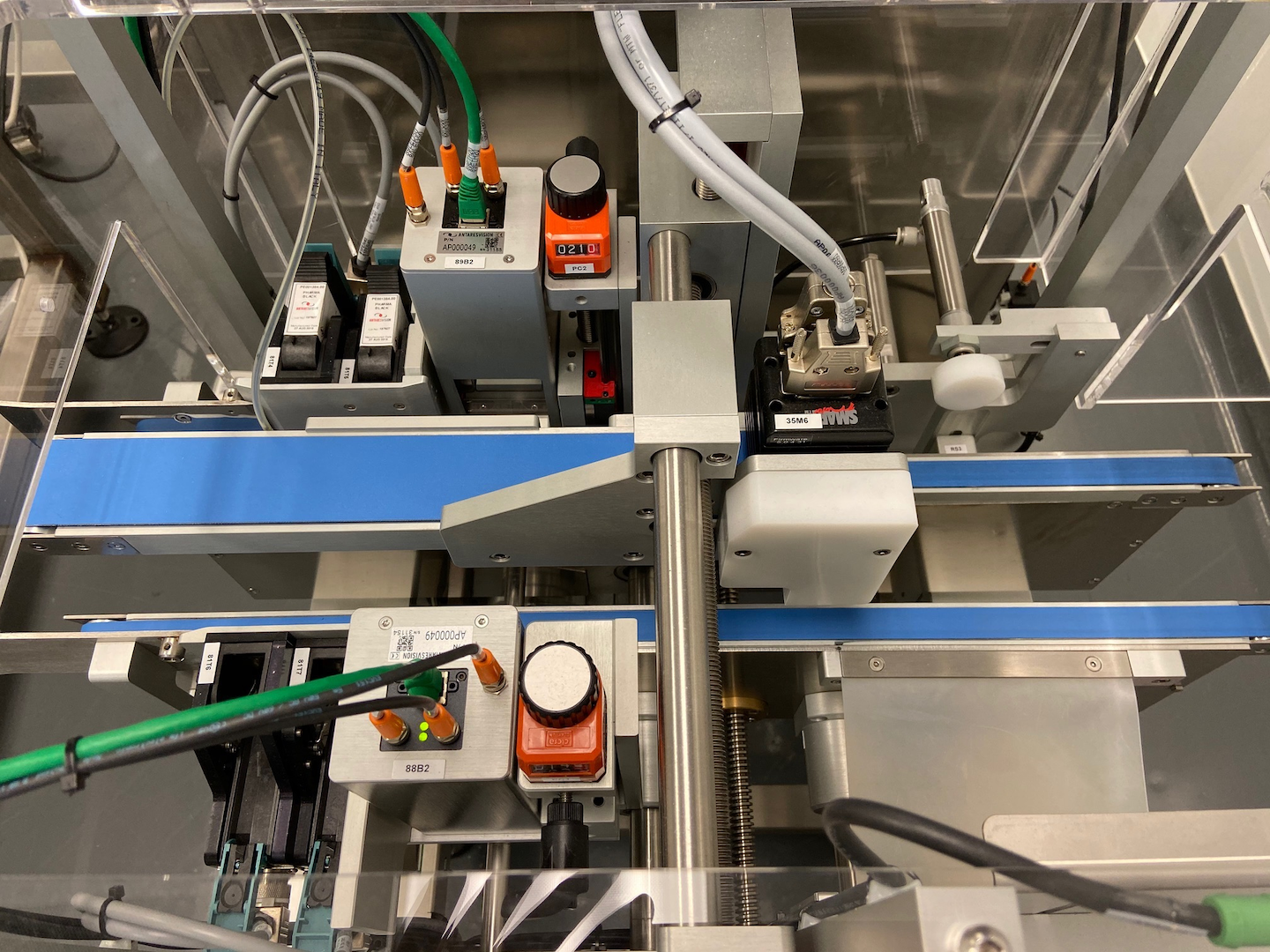 QU4RTET allows Sovereign to customize the system to fit their needs as well as adding additional features to meet the needs of trading partners. A prime example of this is when the QU4RTET system could be programmed to meet the time stamp requirements for a SAP ATTP system to allow the SAP system to successfully process EPCIS messages, as it detects an error in having the same time stamps down to a millisecond in any two salable units.

Hafey says, “With open-source, we’re able make the connections ourselves. For other systems, you have to go through the vendor and they have to do the programming for you. Vantage helped us at first and did the initial set up. Then they taught Ryan the code, and now he can set up all our clients and connect to other L4s such as Tracelink or rfXcel.”

OEE gets a boost

Sovereign actually became more efficient after their serialization journey, training existing employees on the new process. “Overall equipment effectiveness has increased as we are more efficient in packaging,” says Hafey. “Before serialization we had a very manual packaging operation. We now have become semi-automated and with that, we’ve sped up about five to 15% on our line as opposed to a lot of people who have said they’ve taken a cut. Initially, in that first month or two we took a hit, but our packaging people caught on fairly quickly. We had laid out how we thought it should go and they found some ways to make it more efficient in how they scan the codes and stack the cases to get them ready. So we actually have sped up.”

The system was costly at multiple millions of dollars per line. But the company has already seen a reduction in waste, both in time and materials.

Per DeSario: “At the end of packaging, you always have to reconcile for all your labels to make sure you don’t have any bottles without a label. With this system, the reconciliation is completed as soon as the packaging is completed.. Previously, we would have to go back through and inspect if our count was off.  With the implementation of serialization we have not had any reconciliation issues.

“Sometimes a product would have to be repackaged and there’s wastefulness in the time and packaging materials if you had to go back in and inspect and then rebundle the product. From that standpoint, there’s definitely been some savings. Sometimes if the lot number and expiration date stamp would malfunction there could be bottles that went through and were rejected and then we would have to fix the labeler and repackage those bottles with bad labels. Now we have pre-printed labels that have already been inspected. There are quite a few scenarios we no longer go through because of serialization.”

Sovereign is evaluating next steps, keeping in mind that there was recently an enforcement discretion announcement for saleable returns in November.

"The next version of QU4RTET has the ability to connect to a VRS system, so we were looking at installing that, though a number of our customers have already selected someone else,” says DeSario. “In three years, the industry may be sending everything through EPCIS depending on the wholesalers, so we’re not sure how long the VRS will be in place, but it’s something we’re looking at.”

The acquisition will expand the laser technology offerings in Markem-Imaje’s marking and coding solutions business, improving the company’s position in identification and traceability equipment.
Aug 25th, 2020
More in Traceability/Serialization