From the European perspective, Thierry Wagner offered an overview of regulations in the pipeline aiming to reduce plastic use and bolster recycling.

We’d be remiss if we didn’t begin any article covering packaging sustainability with the reminder that sustainability is more than recycling. However, recycling will clearly have a role to play in advancing a circular economy.

Thierry Wagner, global director, regulatory & standards – healthcare at DuPont, began his talk at the virtual Medical Packaging Conference with the UN definition of sustainability in that it meets the needs of the present without compromising the ability of future generations to meet their own needs. He pointed to the UN’s Sustainable Development Goals that encompass social, economic, and environmental targets such as zero hunger, clean water, good health, decent work and economic growth, all while considering our climate and consuming in a responsible way based on circular economics. “These goals have become the blueprint for many companies to align their development and innovation goals against, including my own company,” Wagner said. “Countries around the world have the adopted various actions to move forward on the UN Sustainable Development Goals. The most ambitious plan is probably by the European Union: The European Green Deal, seeking to make Europe the first ‘climate neutral’ continent by 2050.”

Wagner explained that the plan addresses working with nature to protect our planet and health, boosting global climate action, and making transport sustainable for all. It also targets the technologies that we use to produce products and the products themselves, energy systems, buildings that we live in, and greener lifestyles. “So, it's really addressing almost everything,” he said.

Wagner highlighted a few emerging objectives that will help put these concepts into action.

Circular Economy Action Plan (CEAP): This part of the European Green Deal is mainly focused on halting the depletion of natural resources and creating sustainable growth and jobs. The first CEAP was adopted in 2015, with the latest iteration released in March 2020. A few of the tangible goals include:

2018 EU Plastics Strategy: Wagner noted that the 2015 demand for plastics in Europe was estimated at 49 million tonnes with almost 40% attributed to packaging. In 2018, packaging represented the largest amount of plastic waste generation at 60%.

Enforcement must be ramped up as it has not been very strong to date. This may be bolstered by the introduction of green public procurement (GPP) criteria—legislation likely to come out in Q1 2022—directing that public money be spent in a way that supports the objectives. “This is a big target. The European roadmap includes a number of options that are considered and there's going to be an assessment on the impact those options,” said Wagner. “It's not enough to be recyclable in theory. You really have to make sure that the packaging is being recycled. And again, the overarching requirements are to make sure that all packaging is recyclable by 2030, and also reusable packaging must be recycled.” 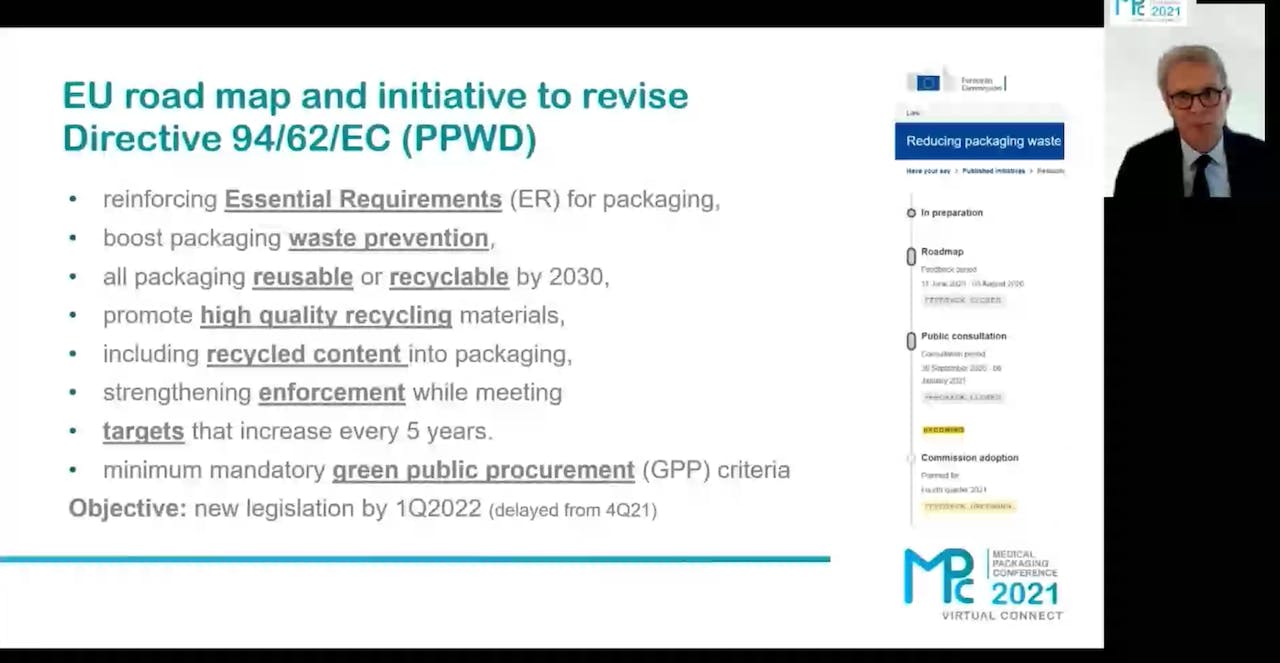 Thierry Wagner (upper right) discussed the European roadmap to revise the packaging and packaging waste directive, which was launched in 2020, including ensuring that all packaging is reusable or recyclable by 2030. (Image courtesy: Thierry Wagner)

Another important consideration in the PPWD legislation: the EU has decided to introduce a new levy to member states at the end of 2020 to finance these activities. Member states will pay a tax of 0.8 €/kg of non-recycled plastic packaging. While the tax’s details are controversial, member states will have an incentive to reduce the amount of plastic packaging produced. “Some countries have already come up with a virgin plastic packaging tax, such as Italy, Spain, and Portugal. We’ve also seen the UK come up with a plastic tax that is going to be applicable next year,” said Wagner. “For the moment, the [EU] tax doesn't include medical and pharmaceutical packaging in Europe, but the UK tax includes medical packaging. So that will be an important driving force. The European Union has seen that this change will require a lot of collaboration.”

The Circular Plastics Alliance (CPA): The aim is to boost the European market for recycled plastic to 10 million tonnes by 2025, and several organizations have signed the plan already to contribute.

Wagner noted that the CPA is going to be very strategic for developing an upcoming European Circular Plastic standardization request. “Europe issues standardization requests to its European standards development organization. The objective of that request is also to develop the standards that are necessary to help achieve those recycled plastic objectives. It's going to focus on developing standards for design for recycling, for the quality of sorted plastic waste, for the quality of recyclates, and also to integrate that recycled plastic into different products. The timeline, again, is quite aggressive, so we're expecting to see something by the end of this year, but this may also be delayed to early 2022,” he explained. 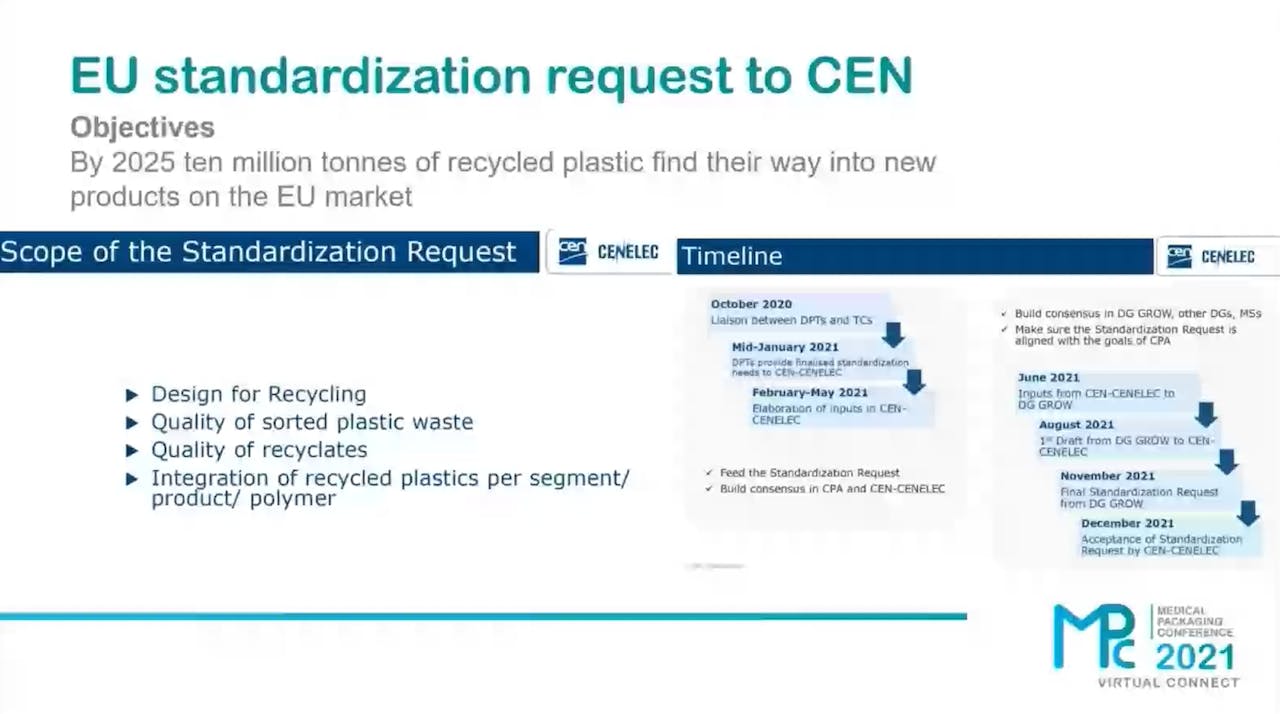 Many of the initiatives listed above apply to other types of single use packaging, but often, healthcare plastics are left out of the EPR discussion due to their critical role for patient safety, along with stringent regulatory constraints, and length development and validation cycles.

“Some of the materials are 100% recyclable like Tyvek, but many combinations introduce limitations. Many multilayer films have been developed to add great functionality to packaging, but that may introduce limitations, as well as mixtures of polymers,” Wagner explained. “Contaminated waste in hospitals is another problem. That's an inherent limit to recycling because it is mostly incinerated, which is considered the most appropriate way to handle the material. Then introducing recycled content is also problematic because our products have to be designed ‘to reduce as far as possible risk posed by substances or particles, including wear debris, degradation products and processing residues.’ Also, inconsistent material composition, impurities, adding substances, etc. can have damaging consequences for patients.” Adding to the complexity, using recycled content in healthcare packaging is only possible with tight control and “flawless traceability” as Wagner put it, and that is limited or even impossible in certain cases, leading to conflicts with the EU medical device regulation (MDR) or the In Vitro Diagnostic Regulation (IVDR) requirements.

As Wagner concluded, “There's no way around circularity. It will come. The world is moving clearly into the direction of circularity, and medical packaging can be a great contributor by providing high quality recycled materials. Introducing recycled content will need a bit more time. With advanced recycling, more possibilities will come as the technology develops. That is going to be the topic of the next 10 years.”

One takeaway is that companies cannot tackle this issue alone. “The way forward—we have to work together and collaborate towards the circular economy. Over time, the industry has worked really well at optimizing packaging operations and sterilization, and at achieving efficient distribution. The supply chain has left treatment of waste to other players in the past, but now it’s become the focus area,” he said. “Designing packaging for recyclability will be key, and that in turn will impact packaging operations and sterilization. The task is huge—it can only be addressed with collaboration by building partnerships. I'm sharing here from a European perspective. Every region has its own industry networks that are now more important than ever.” 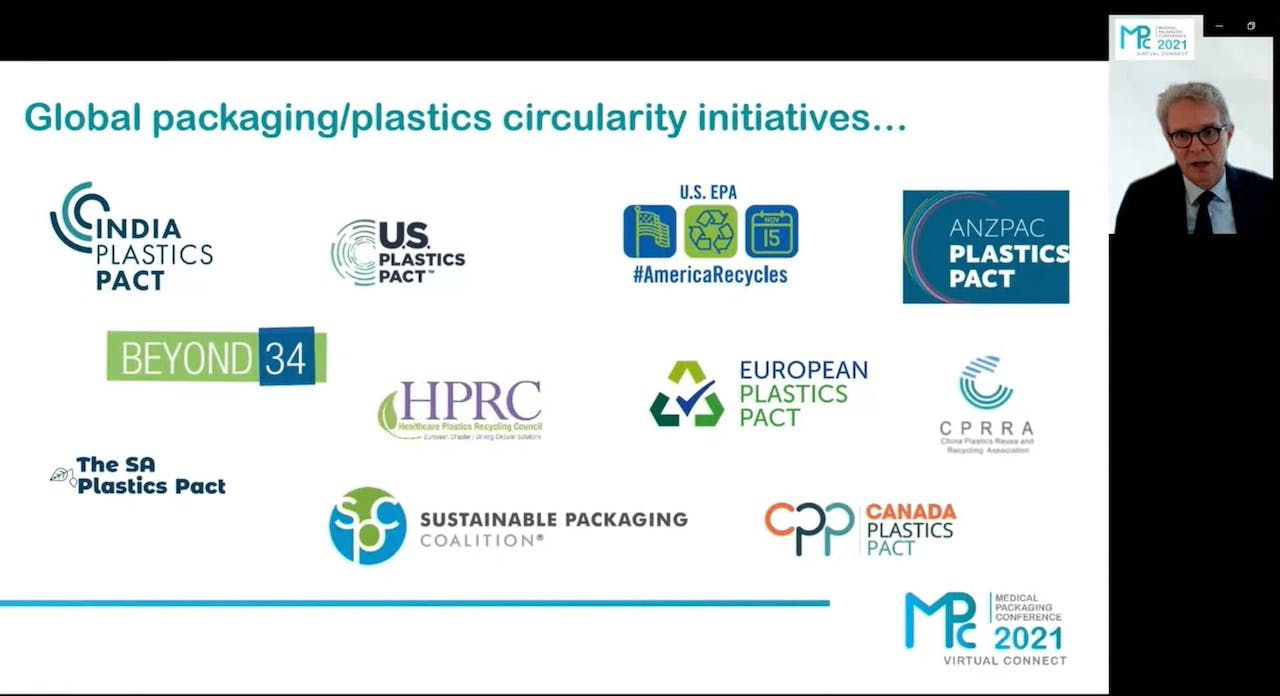 Every region has its own network that will be key to tackling healthcare plastic recycling. (Image courtesy: Thierry Wagner)

Ember Technologies and Cardinal Health partnered on the shipper which offers unique ‘return to sender’ technology. Cardinal Health plans to launch a customer pilot for the Ember Cube in 2022.
Keren Sookne
Mar 16th, 2022
More in Sustainability

Constantia Flexibles Recognized With an ‘A’ Score for Climate Protection Measures