As companies take aim at sustainability beyond recycling, reduction in water usage is a key KPI particularly as droughts and wildfires threaten so many states.

According to MIT-spinoff Infinite Cooling, “40% of all water used in the U.S. is in manufacturing sites and power plants. Much of this water leaves the facilities via high density water vapor from industrial cooling towers.”

Infinite Cooling was one of 10 nature-inspired startups selected as finalists in the Biomimicry Institute’s 2021 Ray of Hope Prize. 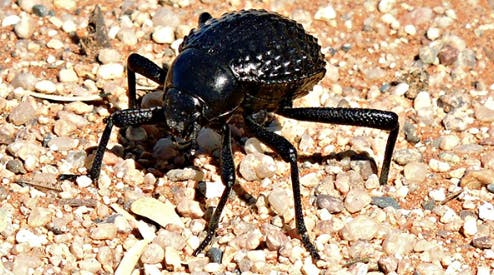 Namib desert beetles put their heads down and angle their wing scales vertically into the flow of desert fog. Water droplets aggregate on bumps on their wings, and run down troughs between the bumps so the insects can drink. (Image credit: Biomimicry Institute)

Taking cues from animals’ enhanced fog harvesting strategies such as Namib desert beetles, the company developed an add-on process to capture cooling tower plumes’ water. With groundwater scarce, Namib desert beetles put their heads down and angle their wing scales vertically into the flow of desert fog. Water droplets aggregate on bumps on their wings, and run down troughs between the bumps.

Infinite Cooling’s WaterPanel™ uses electrodes to ionize air and charge droplets, then collect them via an electrostatic mesh on top of a cooling tower exhaust. The droplets fall down via gravity into trays below.

This can save industrial facilities money, while saving hundreds of millions of gallons of water, depending on the application. This is applicable to cooling towers in pharmaceutical manufacturing, at CPGs, and in food production—and it can be retrofitted to existing towers.

This will hopefully alleviate some strain on local waterways, minimize costs, and increase safety in communities surrounding these facilities.

WaterPanel was installed on MIT’s Nuclear Reactor Laboratory research facility for stringent, 24/7 testing. The technology has to be sturdy enough to withstand heat, vibration, and extreme weather such as a harsh winters and summers, as MIT’s David Chandler explained.

So what’s next for Infinite Cooling? In June 2021, they closed over $12 million in Series A financing. The system is now being prepared for full-scale tests in a commercial power plant and in a chemical processing plant. The company has signed three contracts with industrial facilities across the U.S.

Ember Technologies and Cardinal Health partnered on the shipper which offers unique ‘return to sender’ technology. Cardinal Health plans to launch a customer pilot for the Ember Cube in 2022.
Keren Sookne
Mar 16th, 2022
More in Sustainability

Constantia Flexibles Recognized With an ‘A’ Score for Climate Protection Measures