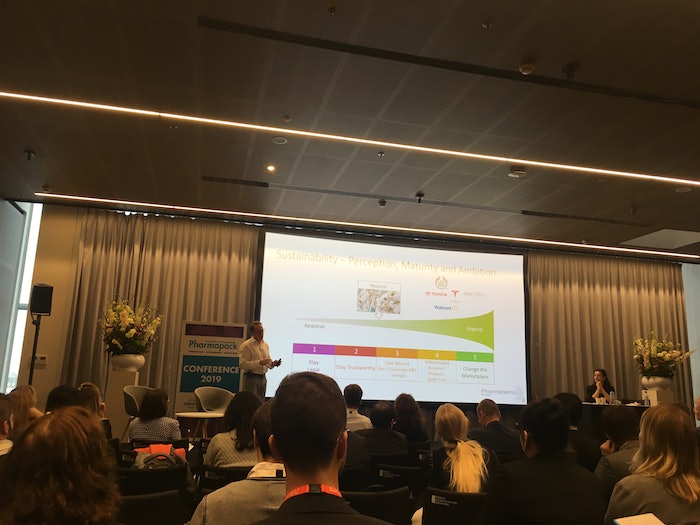 “Historically, we have been an industry that’s tended to shy away from [sustainability]. It’s driven me to get much more interested and involved in this,” said Gregor Anderson, Managing Director at Pharmacentric Solutions at February’s Pharmapack Europe.

Right now, fast moving consumer goods (FMCGs), particularly foods, are under the spotlight. But the healthcare industry can expect more scrutiny in the coming years.

Where is the drive coming from in healthcare? Anderson says it’s a mix of internal factors such as corporate social responsibility reporting as well as external factors:

Consumers are certainly more educated on environmental impacts than in years past. Anderson noted that in his time at GSK, patients made this known, with one saying that they felt guilty throwing the product away each month.

“We have to work as an industry-wide consortium on this. The medicine is king but if we can work together and identify materials and processes that do have CO2 benefits, we could make a big difference,” Anderson noted. “We’ve never accounted for actual CO2 savings. You save money when you save CO2, either by enhanced process or materials.”

Positive impacts can come from unlikely sources. A logistics company scraped barnacles off their boats, making the vessels more efficient and using less fuel. Seemingly little things can add up.

Anderson described a sustainability spectrum that companies fall on, ranging from reactive to mature. On the initial reactive side, companies are doing what they can to “stay legal,” progressing through stages until they are differentiating their products and businesses, building trust and ultimately changing the marketplace.

Anderson discussed the major opportunity that healthcare product manufacturers have to make an impact. Take the inhaler market. It’s projected to be worth $43 billion by 2025, with the market split between metered dose inhalers (MDI) at 60%, dry powder inhalers (DPI) at 30% and smart mist inhalers/nebulizers at 10%. Globally, volumes of single-use doses and multi-dose devices globally are in the billions (with billions of associated packaging units)… and that’s just for respiratory products.

Breaking down LCA numbers for Relvar 92/22 by device, production, API, distribution, use and end of life, he showed how the device and pack breakdown enable better understanding of CO2impact and where changes can be made. The figures included the energy to manufacture the package and device itself.

By making processes more efficient, such as enhancements that speed up lines, companies can reduce environmental impact. One key consideration is that pharmaceutical companies typically don’t make the devices, they design them or buy them from suppliers, so they must work with suppliers early on to engineer out costs.

Anderson pointed out that the CO2 numbers themselves don’t mean much until you begin to compare them to others. The carbon footprint of a Big Mac is approximately 4,000 g of CO2 equivalent gases per serving, where a vaccine’s is under 1,500 and an MDI’s is under 500. He said the awareness is important and he thinks we should start the discussion around waste with end users.

The green impact of non-adherence

It’s wasteful when patients don’t take their medication as prescribed. The pharma industry as a whole has to do more to make patients realize they are part of the total solution, starting with effective training, particularly with medical devices. Companies can add tools—such as a reusable whistle on an inhaler—that lets the patient know that they’ve taken the dose and offers positive reinforcement. Autoinjector trainers also help patients adhere. “From sustainable point of view, you’re encouraging correct device use,” he said.

Propellants are another area that governmental bodies are targeting. In fact, the UK parliament released a document on reducing F-gases that said the National Health System (NHS) should set a target that by 2022 at least 50% of prescribed inhalers are low GWP [Global Warming Potential], and that the government should ensure that by 2020, at least 50% of MDIs are recycled. With Brexit, it’s only one nation but the NHS in the UK is a huge market. Anderson was concerned at the lack of fanfare as he stumbled on this information, asking, “Is anyone beside GSK looking at this? This is news to people… even among producers of MDIs. They have to be made aware.”

Anderson stressed the importance of having a green guide at every company, which enables informed discussions between business groups along with mutual cooperation toward the goal. The benefits, he said, are as much commercial as they are environmental because saving CO2 saves money. The guide should set clear expectations of requirements for primary, secondary and tertiary packaging and help designers rapidly asses the environmental impact of designs, with prevention being most favorable.

He presented the 7 Rs of GSK’s waste hierarchy:

GSK is putting its money where its mouth is when it comes to recycling.The company saw that their inhalers were the second biggest contributor to their global footprint, just after the transportation aspects involved in producing and supplying products globally. around the world. “Complete the Cycle” is GSK’s recycling and recovery scheme for all respiratory inhalers, in which the company provides a convenient way for patients to recycle their inhalers.

The company reports that by the end of 2017, over 1.2 million inhalers had been recycled and recovered. This has saved carbon dioxide emissions equivalent to taking 5,199 cars off UK roads.

At this point, Anderson noted, this is perhaps only 1.3% of inhalers, “but the opportunity is there. This is what we have to do if it can’t go into waste stream.”

As devices become implanted with small electronics, the need for assessment is even greater. Anderson concluded, “With connected devices, what is going to happen when all these end up in the waste stream? No one’s talking about it, we’ve got to talk about it.”

The company was recognized for its policies, actions, and results across key sustainability and ESG dimensions of environment, labor and human rights, business ethics, and sustainable procurement.
Klöckner Pentaplast
Jun 28th, 2022

The project will encompass more than 2,700 solar panels, which, when operational, will produce about 1,500,000 kWh—approximately 15% of the plant’s electricity consumption.
Hoffmann Neopac AG
Jun 27th, 2022