According to at least one published report, his decision will be effective in ‘about a month.’ 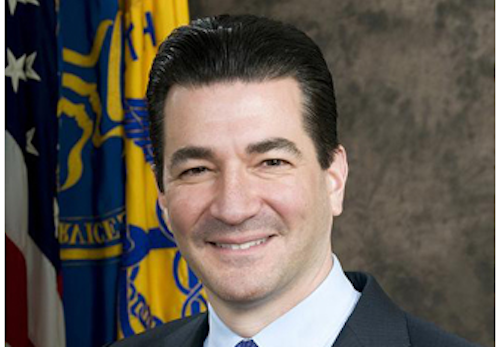 FDA’s Scott Gottlieb Resigns: According to at least one published report, his decision will be effective in ‘about a month.’

A New York Times article says that while he worked in Washington, his wife and three children remained in their Westport, CT, home. The report says Gottlieb “was weary of the commute and missed his family. But he has also been subject to increasing pressure from Republicans in Congress and his former associates in the conservative movement for his tough stance against youth vaping and traditional cigarettes.”

The Washington Post reports, “The resignation was not sought by the White House. A senior White House official said Gottlieb had spoken to President Trump, who liked the FDA chief and did not want him to leave. While Gottlieb had some policy disagreements with the White House, he is well respected, and could even be invited back to another post, two officials said.”

“One can’t help but notice what’s not said. In his announcement of the new efforts, Gottlieb does not say the agency is planning to make new regulations to effectuate its goals. After all, the Trump administration has trumpeted its bias against regulations, regardless of the subject matter.

“Nevertheless, you might have expected that a regulatory agency in an anti-regulatory administration wouldn’t take strong enforcement actions against alleged violators in the regulated industry or give a hard think to how it can do its job better. And yet here’s FDA issuing citations to alleged violators, talking about studying issues, and changing its priorities.”

Greenberg summarized, “Hmm, is Dr. Gottlieb implementing a secret formula for being an active regulatory agency in an anti-regulatory world, by having the agency do everything it can short of making new regulations?”