FDA expects a visual inspection program and parenteral manufacturers should expect questions about their program during any inspection. What's new in 2019? 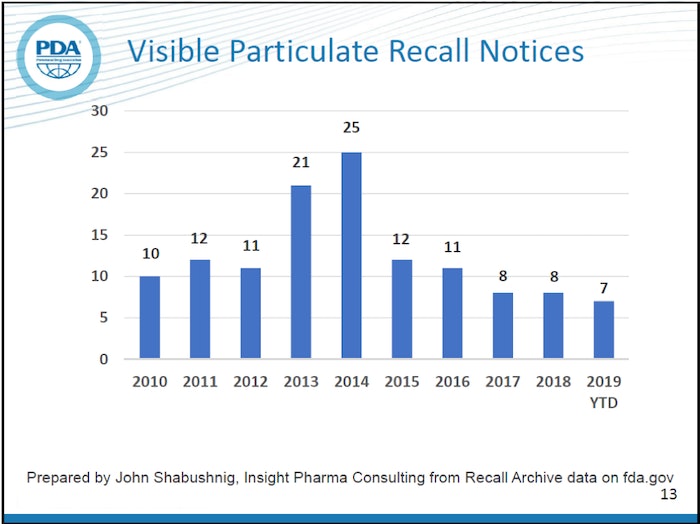 Visual inspection of parenteral drug packaging remains a priority for manufacturers and the FDA, as explained by John Shabushnig, PhD of Insight Pharma Consulting and Richard Watson of Merck at the 2019 Parenteral Drug Association (PDA)/FDA Join Regulatory Conference held in Washington D.C. in Sep. 2019. Shabushnig monitors FDA recall notices, filtering on those that are due to visible particulate in parenterals.

Counting recall notices can be a little misleading because one notice can be for a single lot, or it can be for multiple lots and even multiple products, but it still offers a way to easily measure the frequency of occurrence of a given type of defect. In recent years, the number of recalls listed by the FDA for visible particles has been significantly lower than the spikes seen in 2013 and 2014. The trend for 2019 so far is comparable to recent years. Of course, the goal is zero defects.

According to Watson, most particulate found in parenterals is simple lint, but other types include glass delaminations, plastic, metal and stopper particles. In 2014, after heightened attention was placed on this issue by the regulators and industry, US Pharmacopoeia published new visual inspection guidance known as USP 790. Shabushnig attributes the drop in particulate recalls starting in 2015 to that attention and the new guidance.

A visual inspection program is expected by the FDA and parenteral manufacturers should expect questions about their program during any inspection.

In 2017 the PDA and the Pharmaceutical Manufacturing Forum (PMF) began co-sponsoring a group called the “Achieving ‘Zero’ Defects for Visible Particles in Injectables Task Force”. The aim of the task force is to eliminate visible particulates in injectable products by focusing on ready‐to‐use primary packaging components like glass vials and stoppers. The group collaborates with primary component suppliers and parenteral manufacturers to alignment efforts to achieve the common goal of zero visible particles.

So far the task force has published two papers targeting the issue in the PDA Journal of Pharmaceutical Science and Technology (PDA-JPST).

The task force is now working on two additional papers which they hope to publish in 2020. These include: