A clear line for wine 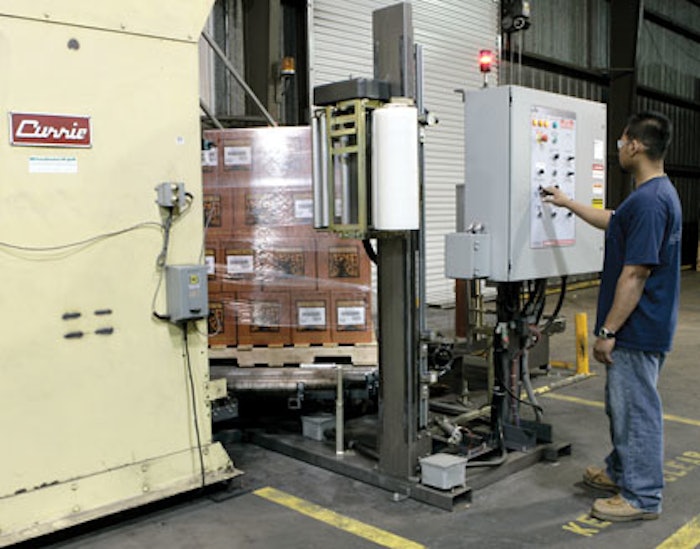 With more than 80 years of winemaking experience, Delicato Family Vineyards produces more than 2.5 million cases of wine annually and exports bulk wine to other wineries. To keep up with demand, the company’s dual high-speed filling lines generate up to 200 pallets of glass bottles per day.

Until recently, Delicato used lift trucks to take pallets of filled wine cases from the palletizers at the end of its filling lines to semi-automatic stretch wrappers that secured the loads. The lift truck driver moved each pallet from the palletizer to the wrapper’s turntable, and then stepped down from the vehicle to start the wrap. Afterward, he remounted the lift truck, moved the wrapped pallet to the winery’s warehouse, and returned to repeat the process for the next load. Two drivers handled the output from the two lines. In addition to being time-consuming and labor-intensive, the procedure presented a safety hazard: Drivers were at risk of injury each time they got down from the lift truck.

While the pallet handling process did not affect the filling lines’ productivity, keeping up with the lines was a challenge. “We were double-handling each load,” says Delicato Bottling Manager Ron Vrieling, “and we needed a way to eliminate that wasted effort and the lost time and labor cost associated with it.”

Vrieling worked with Rob Shoemaker, director of the Western Region of Orion Packaging Systems (www.orionpackaging.com), a division of Pro Mach Inc., to install an automatic stretch wrapper that would streamline operations and eliminate bottlenecks. The FA-66 is an automatic turntable-style stretch wrapping system designed to be integrated into an end-of-line operation. The stretch wrapper handles pallets up to 48 x 48 in. and automatically adjusts to load heights of up to 72 in. It can wrap loads of up to 4,000 lbs. at speeds of up to 12 rpm, which accommodates Delicato’s present output of between 75 to 100 pallets per day on each line and allows for future growth.

Filled pallets automatically roll off the palletizer directly onto the infeed conveyor of the automatic stretch wrapper. The infeed conveyor immediately moves the pallet into the wrap area, where the wrapping cycle begins automatically. “Orion modified the infeed of the stretch wrapping equipment to enable it to interact directly with the palletizer,” Vrieling points out. “That let us eliminate one of the two drivers who were double-handling pallets from our two filling lines. Now we only need one—an immediate saving in both time and labor.”

The Currie palletizer—now known as Currie by Brenton—is sold by Brenton Engineering Company (www.brentonengineering.com), a companion Pro Mach company. Orion was familiar with the palletizer’s specifications and operation, which simplified the slight alteration required to the wrapper’s infeed conveyor to enable pallets to roll directly onto the wrapper turntable.

The FA-66 pre-stretches film by 260% during wrapping, while Delicato’s previous semi-automatic wrappers applied film at 100%. This change resulted in a considerable saving in film cost—an added benefit that goes a long way toward paying for the cost of the new equipment, says Vrieling.

After seeing the positive results of the wrapper on its filling line, Delicato immediately ordered a second wrapper for its second filling line. “This [second] wrapper will include a reverse drive,” says Vrieling. “That will enable us to wrap a pallet that doesn’t come from the palletizer by backing it into the wrapper from the exit conveyor. This gives us the added flexibility of having the function of a standalone wrapper without having to invest in a separate unit.”