Women Exploring New Territory On Earth and in Space 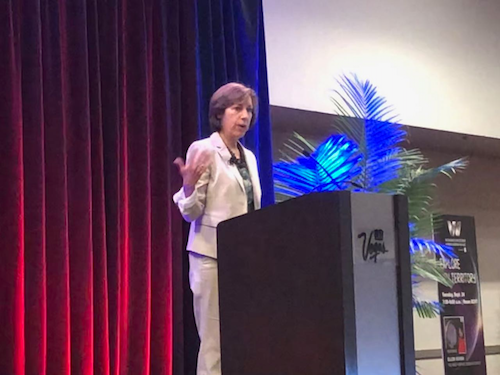 It was record attendance with about 700 people attending the Packaging & Processing Women’s Leadership Network (PPWLN) breakfast at PACK EXPO Las Vegas. The theme of the meeting was “Exploring New Territory,” which was more than just a metaphor for the keynote speaker Dr. Ellen Ochoa, the first Hispanic woman to go into space.

Ochoa, who was on four space missions, was the only woman on three of the flights. But, she said, because of the intense training she underwent with her male colleagues, she was never treated any different. “We were all thought of as individuals,” she noted.

But, it wasn’t always like that. She was the top math student in high school, yet no one ever spoke to her about the field of science. Even in college, an electrical engineering professor tried to steer her away from the profession noting it was “very difficult coursework.” But it was a professor in the physics department who was very interested in her background in math and calculus—the language of physics—who opened up a door, which eventually led to the opportunity of a lifetime to pursue a career that could literally change the world.

Ochoa joined NASA in 1988 as a research engineer at Ames Research Center and moved to Johnson Space Center in 1990 when she was selected as an astronaut. Her first mission in 1993 was on the space shuttle Discovery, and after another space lab mission and two trips to the International Space Station (ISS), she settled back down on earth, taking the job as the 11th director of the Johnson Space Center (JSC). She also happened to be JSC’s second female director.

During her tenure at JSC, where 35% of the workforce are women, Ochoa helped to spearhead an innovation and inclusion program, where they tried to take specific actions every year to engage everyone in the organization, giving a wide variety of people the opportunity for greater experiences. Currently, there are nine employee resource groups at JSC, with one called Women Excelling in Life and Leadership (WELL).

“We need everybody’s ideas and brain power,” Ochoa said. “For an organization to be the best it can be people need to feel valued, they need to feel respected, and if they speak up they need to know that their contributions will be recognized. I feel so fortunate to have had the opportunity to work for an organization that understands that, and to be part of a team in the great adventure of space exploration.”

The Coronavirus pandemic is creating a growing waste crisis even as we see images of the earth’s environment clearing from less pollution. A few months into the crisis, and the numbers are staggering.
Kim Overstreet
Jun 29th, 2020
More in Home