Oceans of trash pose a complex challenge that could be too onerous to resolve given modest plastics packaging recycling, the economic advantages of using virgin material, and the sheer volume of containers floating around the globe. 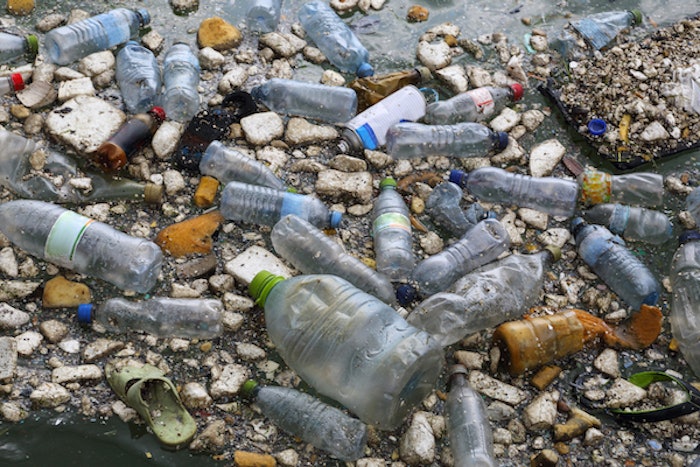 Oceans of trash pose a complex challenge that could be too onerous to resolve given modest plastics packaging recycling, the economic advantages of using virgin material, and the sheer volume of containers floating around the globe.

Nearly two years ago, a World Economic Forum headline reported, “Every minute, one garbage truck of plastic is dumped into our oceans. This has to stop.” It has not.

In fact, plastic marine litter has become such a hot-button issue that in its 4th Progress Report, the Global Plastics Alliance collaboration pointed to some 355 projects addressing marine litter that had been planned, underway, or completed as of December 2017.

A July 19, 2017 National Geographic report put numbers on the problem, noting that mass production of plastics has created 8.3 metric tons of products in six decades, with waste accounting for a whopping 6.3 billion of that total weight. The story estimates that “8 million metric tons of plastic ends up in the oceans every year.”

Plastics recycling could bring some relief, but “solving the issue is about as large and complex as the ocean itself,” says The Mechanics of Effective Recycling, a new article from HSM UK. It lists several programs underway that aim to address plastics litter in oceans, including “The Farm Project” initiative that raises this frightening question: “If plastic is making its way into the stomachs of sea life, then who’s to say it’s not ending up in ours, too?”

The UK Plastics Pact initiative was developed to create a circular economy for plastics, setting the following ambitious 2025 targets:

• That 100% of plastic packaging be reusable, recyclable, or compostable

• That 70% of plastic packaging be effectively recycled or composted

• That all plastic packaging include on average 30% recycled content

An April 30 article in The Ecologist believes the voluntary pact doesn’t go far enough, noting, “The Green Party is calling for a ban on all unnecessary single-use plastic.”

“Plastic has such a ubiquitous presence in modern-day society that it is difficult to imagine the impact of being without plastic. Globally, plastic recycling is increasing but tends to lag behind other materials. In part, the ability to produce virgin plastic so economically has thwarted the development of recycled plastics. However, with a growing sense of environmental stewardship, creating capacity of recycled plastics and brands’ uses of them looks set to rise. Currently, around 30% of plastics in Europe, 25% in China and 9% in the U.S. are recycled.

“Attention is on those single-use plastics with a very short lifespan littering the environment. Solutions to address waste or alternatives are sought. Plastic, however, holds a highly valuable, functional role, in protecting and preventing food waste. With its success in use, however, comes responsibility post-use to reduce its occurrence as environmental waste. Mindful consumption of plastic is a global duty; consumers have their part to play to help realize zero litter (the dream), as do corporate players in their use and handling and governments in providing the necessary infrastructure.”

Packaging supplier Pregis announced May 3 that it was joining the How2Recycle coalition to help simplify recycling instructions for consumers. “For many packaging material types, there is consumer confusion regarding recyclability and disposal. The How2Recycle approach uses labels printed directly onto the packaging material, which gives the consumer specific recycling instructions,” says Pregis Chief Innovation Officer Tom Wetsch. “The goal is to reduce consumer confusion and increase the amount of material that can be reclaimed and used in new lifecycle applications.”

Modest plastic packaging recycling numbers and the apparent economic benefits of producing plastics from virgin materials make the litter issue even more difficult to challenge, both on land and at sea. Yet there’s a third complicating factor, which relates to demand for greater future use of rigid plastic food containers.

The popularity of smaller, single-serve containers for convenience and portion control is further increasing rigid food container demand. So even if containers are produced using less raw material to meet barrier requirements and save material and shipping cost by decreasing fuel consumption, the result is still more plastic.

The call for consumers to play a more significant role in reducing plastics packaging waste was mentioned in the April 25 Fashionista article, Beauty Brands Are Finding Innovative Ways to Reduce Packaging Waste, which was posted to Yahoo.com/Lifestyle.

The article cites examples of sustainable packaging developments with positive environmental impact. However, the story also quotes Ashlee Piper, a sustainability expert, TV personality, and book author, as saying, "It's critical for consumers to stay vigilant and not be greenwashed by lessened packaging alone."

The story notes, “Packaging does play a significant role in a company's carbon footprint, or lack thereof. Most beauty products are swathed in plastic, but only 12% of plastic is recycled, which means that eight million tons end up in our oceans every year. By 2050, there will be more plastic in the ocean than fish, and, already, nearly 80 million tons of plastic comprise the Great Pacific Garbage Patch.”

Help and hope (or no hope?)

This patch, located between Hawaii and California, represents the largest trash accumulation area in the ocean, made up of 1.8 trillion pieces of plastic weighing 80,000 metric tons, according to The Ocean Cleanup. The Delft, Netherlands-based organization is made up of more than 70 engineers, researchers, scientists, and computational modelers “working daily to rid the world’s oceans of plastics.”

Rather than using conventional methods—such as nets and vessels—to clean up the patch, which The Ocean Cleanup says, “would take thousands of years and tens of billions of dollars to complete,” its passive systems technology aims to “remove half of the patch in five years, and at a fraction of the cost.” Set to deploy this year, the floating system will use a screen and—get this—high-density polyethylene pipe to catch and concentrate plastic while providing buoyancy.

ScienceDirect in late 2017 published a detailed report, Solutions for global marine litter pollution, which illustrates the issue’s daunting complexity. It noted, “Successful actions aim at a diversity of goals, ranging from changing consumer behavior, the introduction of new technologies, the design, implementation, and enforcement of a multitude of plans, policies, and laws, to full-scale revision of current practices of production, use, and management of waste. This implies active involvement of consumers, producers, policy makers, managers, inhabitants, tourists, (fisheries) industries, companies, and many other actors. A move toward sustainable and resilient societies may need to raise awareness and involvement of all stakeholders in society.” So there’s the solution!