This year’s 2015 Diamond Award Winner in the annual DuPont Awards involves one brand owner’s leap of faith in a unique innovation in plastic packaging. 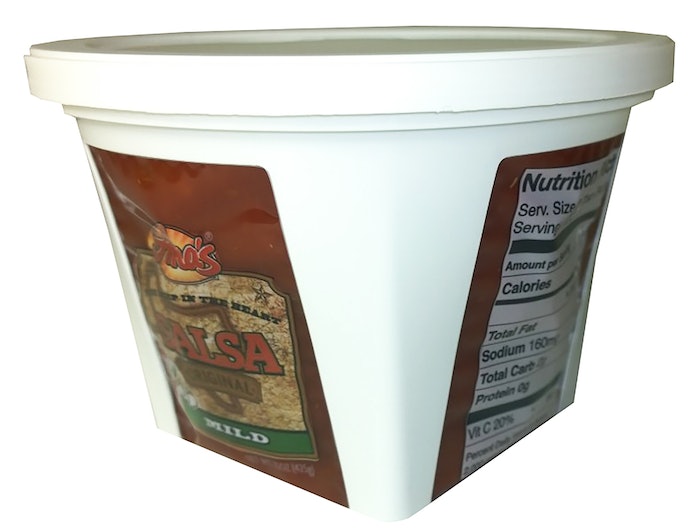 IPL's SkinnyPack for Ana's Salsa is the 2015 Diamond Award winner in the DuPont Awards competition.

The hybrid plastic tub, made by injection molder IPL Inc., was described by the DuPont Award judges as the kind of thing that “highlights the world of possibilities that exist for packaging.” In November 2014, Austin, TX-based fresh Mexican salsa maker Ana’s Foods became the first to package its products in IPL’s SkinnyPack™, an injection-molded polypropylene container that combines the advantages of flexible film—lightweight, flexible, and printable—with the benefits of a strong, rigid plastic frame.

The collaboration began in June 2014, when Ana’s was approached by IPL with a prototype of the SkinnyPack. “We were looking for new packaging to replace our deli-style tubs,” says President/CEO of Ana’s, Anna Olvera-Ullrich. At the time, the company was using two container formats: a standard, 16-oz round in-mold labeled tub and a 12-oz single-use deli-style tub with hand-applied labels. While the 16-oz rounds met Ana’s requirements, the 12-oz tubs often leaked and “did not look very appealing,” says Olvera-Ullrich.

The SkinnyPack not only offered Ana’s greater shelf appeal for its product, but it also provided them with a more eco-friendly package. The container is manufactured by fusing a multilayer 2.36-mil adhesive-laminated film, constructed of PP/ink/PP, to four rigid PP posts, resulting in a square/round shape, or “squround,” that allows for graphics on all four sides. The lighter-weight package uses 54.8% less plastic than a rigid tub and, being constructed completely of PP, is 100% recyclable. The format is also stackable, resulting in cost reductions in shipping and stocking.

“We immediately liked the look of the new tub and felt that it had the potential to replace our existing tub with something that would really attract customers’ attention on the shelves,” says Jim Ullrich, Senior Vice President of Ana’s. “We also appreciated the minimal use of plastic that made it extremely eco-friendly.”

Far from being daunted by the prospect of being a guinea pig for the SkinnyPack, Ana’s welcomed the opportunity to be the first user. “We felt that it could give us a marketing edge over the competition,” says Ullrich. “We knew it wouldn’t be smooth sailing, since it was a new design and hadn’t been tested in the real world of commerce, but we were confident that IPL and our company could work through potential problems.”

One challenge was redesigning Ana’s label graphics to fit the complex shape of the SkinnyPack. While remaining the same in concept, the front-panel logos and wording as well as the nutrition facts panel had to be changed in size. Another panel was used to highlight the container’s use of “less plastic,” while the UPC and “Manufactured for Ana’s Foods” copy from the old tub were moved to the bottom of the container. The four-color IPL label, which fills in between the “legs” of the tub and completes the bottom of the container, is converted by Precision Press.

Filling of the new package presented no issues however, as the SkinnyPack uses a standard, 409-dia lid, allowing it to run on existing packaging equipment. The format is also compatible with both pocket and conveyor belt systems.

Ana’s engineered the tubs for both its 12- and 16-oz sizes, at a cost that is virtually on par with its former containers and lids. Reports Ullrich, “The end result is that we’re only paying a penny more for the twelve-ounce SkinnyPack tub and ready-to-use lid.”

In October 2014, just before launching the SkinnyPack on shelves, Ana’s conducted a survey of its consumers on the new container. Reports Olvera-Ullrich, “Eighty-seven percent said they liked the design, using phrases such as ‘cool,’ ‘unique,’ ‘interesting,’ and ‘I especially like the less plastic.’ Eighty-five percent said the design would attract their attention enough to possibly make them want to buy the product. One said, ‘The shape makes me want to eat the salsa right out of the tub; it reminds me of a molcajete [the traditional Mexican version of the mortar and pestle].’”

Since being introduced in fall 2014, Ana’s Salsa in the SkinnyPack package has been picked up by a range of Texas grocery chains, including Randalls, TomThumb, H-E-B Grocery, Fiesta Market, Arlan’s Market, and Market Basket. Ana’s also ships its salsa to customers around the country.