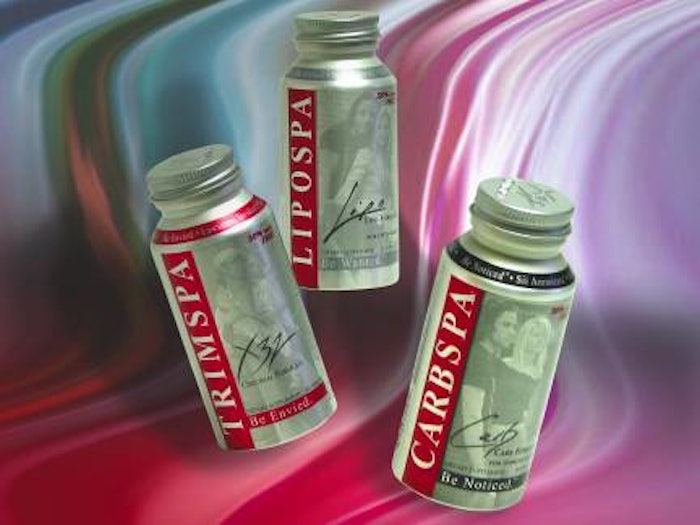 Trimspa is a leading diet aid and nutritional supplement product that has become well-known worldwide, thanks to its use of celebrity endorsers, like spokeswoman and model Anna Nicole Smith.

That same popularity has made the brand ripe for counterfeiting. So the company moved to an aluminum bottle to hold the product and make counterfeiting extremely difficult. Last fall, the Cedar Knolls, NJ-based company introduced the new aluminum bottle from CCL Container, the first container of its kind for products like the Trimspa capsules.

The new container is “in perfect alignment with what Trimspa is all about: cutting-edge science and cutting-edge packaging technology,” says Alex Goen, founder and chief executive officer of Trimspa. “It’s like a perfect marriage. The technology of the aluminum bottle clearly supports the Trimspa brand, message, company values, product uniqueness, and commitment to people and the environment.”

Although CCL Container has been producing aluminum bottles for several years, the Trimspa application presented a number of challenges. The supplement company absolutely required not just one, but two separate tamper-evidence features. It also developed graphics that were difficult to reproduce on an aluminum container.

The 38-mm steel closure from Penn-Wheeling is also more unusual than the company’s stock continuous-threaded closure would indicate.

“Originally, we started with an aluminum CT closure,” says Bob Sterner of Penn-Wheeling. “But we switched to a steel CT closure for improved performance. However, to make it look like the bottle, we actually print it to look like aluminum and we deboss it as well.”

The company uses lithography to print the cap to match the aluminum bottle, or what the company calls “an aluminum print.”

Although CCL has developed an improvement in thread design for use of a breakaway band on its plastic-capped beverage bottles, the Trimspa container employs a neckband over the cap for the most noticeable tamper-evident device.

When Penn-Wheeling ships the steel caps to Trimspa, each closure is fitted with a pressure-sensitive liner inside to seal to the top of the aluminum bottle. Induction sealing couldn’t be used with an aluminum bottle because the heat generated in the process would burn off the heat seal, Martin says.

In capping, once the closure is fully seated on the bottle, the p-s adhesive on the liner bonds with the top of the aluminum bottle. To assure a good seal, CCL had to make sure that the land area at the top of the bottle was wide enough. “We had to increase the dimension of the land surface so the area would be large enough to ensure good seals of the inner seal,” Martin says.

As might be expected, CCL created all custom tooling to make this container with its added TE features. Because Trimspa partnered with CCL on the development of this container, it has exclusive use of this bottle. Although CCL developed two sizes, a 60-ct and a 90-ct bottle, Trimspa is using only the 90-ct bottle for now.

The company actually has three products that use the new bottle, Trimspa X32, LipoSpa, and CarbSpa. A sister company, Winfuel, will also introduce its product in the new container. The concern over counterfeiting is evident in the products’ retail prices: a 90-ct bottle for $39.95, or three for $99.

Debossing on next run

Trimspa’s seamless aluminum bottle will be almost impossible to replicate, unlike more common plastic containers or glass bottles. And Trimspa graphics, including a monochrome screened photo image, enhance the uniqueness of the container. In addition, CCL will soon add another feature by debossing a part of the Trimspa logo on the sides of the bottles.

CCL produces the containers in an inline process, Martin adds. “We begin with a slug of aluminum and at the other end, we have a decorated can ready for filling and capping. We do impact extrusion of the slug into a cylinder, clean it, line it internally, neck it in with a series of progressive dies, and then decorate the bottle. In that part of the process, we use dry offset lithography with a separate plate for the duotone.

“After decorating, the container is conveyed to a process that adds the TE features and machines the threads into the neck prior to pack-off,” Martin says. Unlike a soft-drink can, CCL uses what’s known as a 1070 alloy, about 99.7% pure aluminum, that’s softer than the aluminum for beverage cans. “That softer aluminum means you can create a lot more shape in the necking process,” he points out.

Another advantage of this container, says Trimspa’s Goen, is the recyclability of the aluminum bottle. “Aluminum is the most recycled material in packaging,” he says. “We are very concerned about the environment and felt it was the most natural and responsible material to use.

“And we’ve found that our customers feel great about buying a product that is sensitive to the environment. More important, they appreciate that we worked very hard to protect the quality of our product, and designed our package with counterfeit protection in mind.”