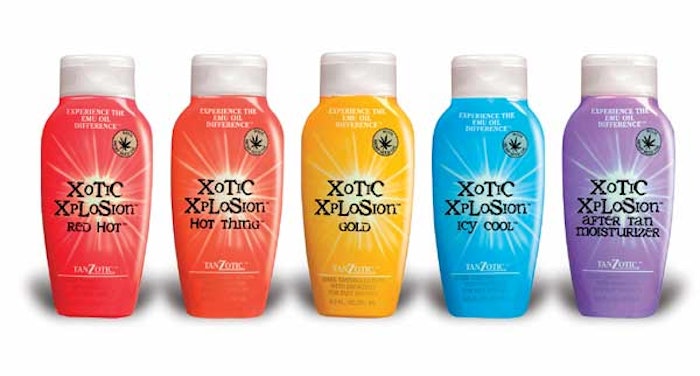 “It’s hard to compete with the ‘big boys,’ but our unique tanning products are so unique and different from anything else on the market, we are basically in a league of our own in modern day skincare,” claims company president and co-owner Carlos Burleson. “Once people give our products a try, they buy them again.”

That’s where the sleeved tottles come into play. Introduced nationwide last November, the four tanning lotion varieties retail for around $38 each, and $18 for the after-tan moisturizer.

This new tottle also adds an extra dimension. While the previous design was only able to stand on its cap, this tottle can be set on its base or on its 24-mm finish cap. “If inverted, not as much squeezing is required,” notes Burleson.

The prior packages that debuted summer ’03 were screen-printed. “At that time, I thought the design was okay,” says Burleson. “After it was in the market, people told me it was a plain looking package that wasn’t bright enough and not pretty enough for our target market of young ladies to want to buy. People that would try it would like it and buy again, but it didn’t catch their eye off the shelf.”

The new design was done for Seal-It by Christopher Harri Design. “We wanted an explosion effect,” says Burleson, “and this was the best among several versions submitted.”

The tottles were sized to a fit a lady’s hand “real well,” according to Burleson. “And it was the right size,” he adds. “Most tanning lotions are eight ounces.”

What about results? “People are drawn to it and everyone seems to like our packaging,” sums Burleson. “We may add more line extensions.”