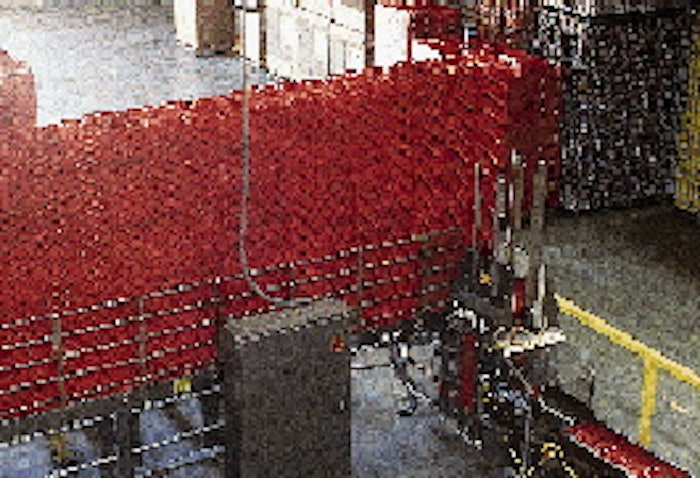 Corrugated board is almost a thing of the past for customers of Coca-Cola Bottling Group, the company that operates two Texas production plants, Southwest Coca-Cola in Abilene and Coca-Cola Southwest in San Antonio. Last year, the two plants completed a conversion from corrugated trays to returnable high-density polyethylene trays for shipping soft drinks in cans. The trays are molded by Rehrig Pacific Co. (Los Angeles, CA).

This change comes nearly a decade after the firm did the same thing for shipping soft drinks in plastic bottles. In fact, that experience-especially the 40-plus trips those bottle "shells" typically achieve-were considered a guide for the results with the can tray. The shells have deep cavities that hold the bottles firmly and permit stacking on pallets.

However, while returnable can trays have been available to bottlers for about five years, the two Texas plants represent the largest installation yet to adopt them; the initial order was for more than three million trays. And it's safe to say that other soft drink packagers are closely watching the experience of Coke in Abilene and San Antonio.

The company stresses that its motivation wasn't cost savings, but rather "doing the right thing for the environment." In fact, the company embarked on a high-visibility promotional campaign in its markets that touted the environmental benefits of returnable trays. This program, say beverage industry observers, was critical in persuading retailers of the benefits of the returnable tray program.

However, while being a good corporate citizen might be desirable, the company certainly didn't want to absorb increases in labor costs, says Joe Hopkins, vice president of operations. That's why the company didn't just change its trays, it completely upgraded the back end of its canning line with new equipment to automate handling of the new trays.

The soft drink packer says that it cost-justified the use of returnable trays based on a savings of five cents/tray vs. corrugated. In fact, says production manager DeWayne Bear, "The tray is paid for in just about three trips. Some studies we've done show we're getting a minimum of about 12 trips on can trays, so that's how we arrived at our savings when compared to one-way corrugated."

The decision to invest in returnable trays for cans was based on the company's trippage experience with bottle shells. "We monitored the number of trips for those, and after we recorded 40 trips per tray, we stopped counting," Hopkins recalls.

Still, the soft drink company does charge its customers $1/tray as a deposit. However, according to Hopkins, it's rare when money actually changes hands. "We told the stores that it's the right thing to do, and consumers don't take the trays home," he adds. Southwest's environmental campaign was very persuasive to its accounts and to the public, PW was told.

In its area, the bottler estimated that nearly 67% of the corrugated trays that it packed cans in were not being recycled, so the real landfill savings were experienced by customers. In-house, Southwest Coke did recycle all of its corrugated material.

Most of the soft drink company's retail volume is serviced by store-door delivery drivers that operate from the company's terminals. These route drivers typically restock supermarket shelves, and Bear says, "It was a lot easier for the route people to discard the corrugated trays than to recycle them. Now our people don't fill up the dumpsters at the stores with the corrugated trays." The bottler also showed retailers how the conversion to returnable trays would help cut their refuse costs.

While the savings in material costs were anticipated upfront, the soft drink company didn't expect some other economies it's now experiencing.

The most impressive hidden advantage comes in productivity. Virtually no one anticipated that the change would enhance productivity. "When you use corrugated trays-and we were running fifty to sixty thousand trays per day-paper dust gets into all of the equipment. Since we switched to plastic trays, clean-up costs on the line have been cut by about two-thirds," Hopkins says.

Also unexpected, he says, was a reduction in downtime on the line. "With corrugated trays, some are misglued and come apart down the line, jamming the equipment. We monitor our unplanned stops, and they've been cut from about seven percent down to about four percent." That's cutting downtime by about a third.

The new package also yields better product protection. "One of our biggest customer complaints is leaks from damaged cans," says Hopkins. "As cans have become lighter, they are much more susceptible to damage from things like nails protruding from pallets. We don't have solid data yet, but we believe that the plastic trays protect the cans better."

Nigrelli and Hartness worked together with Rehrig to develop the automated handling system that Southwest Coke uses. Because the bottler wanted the trays to handle both six-packs using ring carriers and 12-packs wrapped in paperboard, Rehrig had to modify its tray dimensions, making the interior dimensions of the trays a bit larger to accommodate the 12-packs.

However, says Ken Smith of Rehrig, shallow cavities are molded into the tray to help the six-pack cans seat properly when that package is being run. "To be large enough to let two 12-packs wrapped in paperboard fit comfortably, the tray would be too loose for the six packs. The indentations keep the cans in their proper position," says Smith.

The denesting system can handle a wide variety of tray styles, from the shallow 12-oz can tray up to 3-L bottle shells. The pallet shuttle system is custom-designed to meet each plant's layout requirements.

"The tray handling system has really worked out well for us," Bear says. "Adding it was not a problem because we completely changed the back end of our line. There was a real cooperative effort among the vendors, and Nigrelli was the lead contractor in getting everything installed."

Full pallets of empty trays are loaded onto the Nigrelli shuttle system where they advance to the operator station. That operator transfers the columns of trays from the pallet across a transfer plate onto the infeed of the denesting station. This transfer, although manual, requires no lifting or bending. The columns of trays are conveyed to the hopper magazine of the denesting unit, while the empty pallets are automatically transferred into a 15-count pallet stacker.

The 30'-long denest accumulation conveyor will hold approximately 1귔 can trays. When the line is running at 60 trays/min, the operator has a full 30 minutes before he has to transfer more columns of trays into the denester. At these two plants, the operator not only transfers trays but also is responsible for monitoring the nearby tray packer.

The columns of trays are automatically fed and lowered by gripper belts into the feed station of the denester. The bottom tray is positively separated from the stack and placed onto a discharge conveyor. Sensors monitor the tray flow, so a limit switch stops indexing trays until the case packer can accept more.

The continuous-motion tray packer, a Model 2600 from Hartness, is an adaptation of the continuous packer that's used to pack bottles. The manufacturer has designed can and tray modules that can be wheeled into place and incorporated into the machine, one for six-packs, one for wrapped 12-packs, explains Hartness' Mark Nunn. The other major change from a bottle packer is that all lane dividers are nylon-coated to minimize abrasion of cans and graphics.

"The big advantage of this system is that it will run either returnable trays or corrugated trays," says Nunn. "This is what Coke was looking for. And there's really no changeover from one material to another." The new packer is essentially two conveyors that merge for can loading. The top conveyor brings in six-packs of cans in two lanes or 12-packs in one lane. The bottom inclining conveyor carries the trays.

The packer module uses conveyor stop pins to separate four six-packs or two 12-packs with a flight bar, and the package group is conveyed down an angled feed chute to drop into the leading edge of the tray. The cans seat themselves into the indentations of the tray; the paperboard-wrapped 12-packs are mechanically positioned with a kicker arm.

Although the bottler is pleased with the bottom-line benefits of the switch to plastic trays, Hopkins is adamant about the original motivation. "Sure we knew there would be cost savings. But as a company, we felt the conversion was the responsible thing. We recognize our responsibility to the environment.

"And we hope that other bottlers, once they know it's easy to do and worth the trouble, will feel the same way. We really hope this catches on."