Researchers at the Universities of Luxembourg, Ljubljana and Vienna collaborate on non-biometric physical tokens that can’t be cloned or copied. 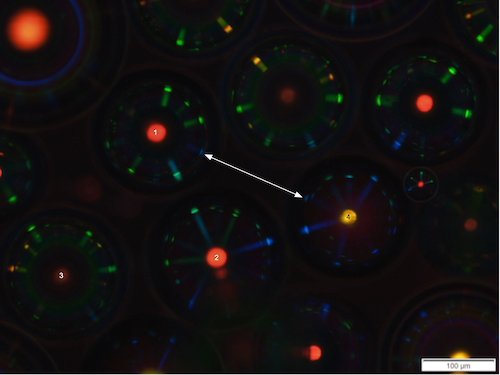 “The Fake Drug Industry is Exploding, And We Can’t Do Anything About It,” screamed the headline of a September 2015 newsweek.com article that brought up the possibility of international treaties to criminalize pharmaceutical fraud, counterfeit and/or falsified drugs.

A new approach to battle counterfeits of high-value products is in early development via a multinational collaboration involving researchers from the Universities of Luxembourg, Ljubljana and Vienna. Their approach involves producing unique reflecting patterns that can be applied on objects, or potentially their packaging. These would be unclonable non-biometric physical “tokens,” or objects that respond in a unique way to physical inputs of different kinds. For instance, they scatter light in unpredictable directions or sparkle with variable colors when illuminated, react with unknown delays or start up in random states when switched on, as illustrated in the photo here from the © University of Luxembourg.

Earlier this year, a team of authors from these universities developed a reference article on the subject. One of the authors explains how the technology could be used in the pharmaceutical space:

“The current work has been devoted to demonstrating that a token can be developed with high optical quality, with appropriate mechanical rigidity, and that patterns can be generated with considerable potential to create unique tokens for the use case,” noted Co-Author Jan Lagerwall.

“So far this is a purely academic research project. Concerning the aim to protectively label pharmaceuticals, this is more delicate. If you would like to label each pill (or other drug carrier), this would require a lot from the label, most importantly that it is food-grade. The systems that we discuss in the paper are not, so we would need to get the same type of optical effects using an entirely different chemistry,” said Lagerwall.

“However, a much easier-to-realize protection would be a seal of the medicine container, where our technology could authenticate the quality of the unopened jar. The seal would need to be designed such that the authentication token is broken when opening the jar, in order that the jar cannot be refilled with counterfeit pharmaceuticals and resold. There is still quite a bit of development ahead,” noted Lagerwall.