Hyland’s reaches outside its comfort zone to relaunch kids ointment in a sustainable paperboard dispenser. 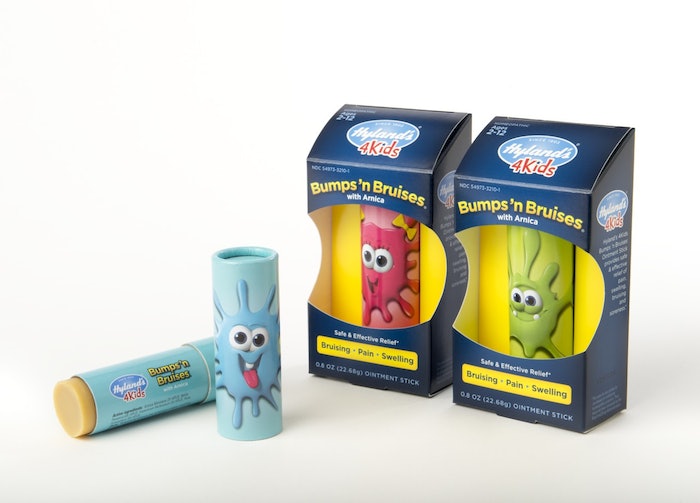 Shown here are two ointment varieties/characters in their outer cartons, with a third version in just its colorfully overwrapped chipboard tube.

Want to meet someone passionate about package design?

Say hello to Kara Errickson, an independent industrial designer who helped redesign packaging for Hyland’s, Inc.’s 4 Kids Bumps ’n Bruises® with Arnica, an ointment stick that provides natural relief of pain, swelling, bruising, and soreness for children when applied to the skin.

“I'm an industrial designer who has worked in consumer packaged goods, primarily in the personal care industry,” she notes. “That market tends to focus on the glamour and the consumer side of the experience versus the technicalities required for pharmaceutical packaging.”

It’s why Hyland’s, a maker of natural homeopathic medicines since 1903, reached out to her—they wanted “to gain a fresh perspective and take a look at recent innovations in more sustainable packaging,” she says.

Before 4 Kids Bumps ’n Bruises® with Arnica first launched in its new packaging on Target store shelves in early 2015, Los Angeles-based Hyland’s sold the product in a plastic tube within a shrink-wrapped, two-sided paperboard card.

“The packaging is what consumers see first,” shesays Errickson. “It was easy for me as a mom to put myself into the place of the consumer to perceive what they're looking at when they're standing in front of this OTC pharmaceutical category, which is flooded with hundreds of products. How would we make this stand out and catch the eye of the consumer so that we could get past that first hurdle and get the product off the shelf and into their cart?”

Unlike Hyland’s previous package, the new ointment tube is not made of plastic, but 100% recycled chipboardpaperboard, which Errickson, and Hyland’s, see as a more sustainable option.

The spiral-wound paperboard tube, its internal piston that allows users to push up the ointment to apply it, and an outer cap, are all supplied by Chicago Paper Tube and Can Co. After forming the tube, the company also provides the colorful label, which is made from 70 lb text-weight paper, is partially recycled, and that wraps around the tube. The label is printed commercial offset is printed digitally in four water-based colors and machine-applied to the spiral-wound tube with a food-safe, soybeanwater-based adhesive, eliminating the use of petroleum-based solvents.

The outer paperboard folding carton is supplied by Royal Paper Box. It is printed offset-lithography in six colors. The tube stands within a “cradle” designed into the carton’s base. The colorful tube is not only visible through the die-cut window in the carton, but it can also be touched through the window, adding another sensory dimension to the package, which is not film-overwrapped—again, primarily for environmental reasons.

“We were trying to go as resource-friendly as we could,” says Errickson. “One of the motivations for this was to develop a packaging system that would be completely paper-based.”

Hot-filling of the ointment is outsourced, a process that Errickson says can be tricky.

“If you're filling at too hot a temperature you're going to get form distortion, which is going to pull the walls of the core away from the piston, which means it's going to leak before it has time to set in the manufacturing process. If it's not warm enough it won't fill properly as you'll get cavities, or little air pockets. Also, if you're too cold it won't function in your fillers because it solidifies too soon.”

The filled tubes are returned to Hyland’s for the colorful film overwrapping process followed by manual packaging. Suppliers from the Midwestern U.S. were selected to reduce the environmental transportation footprint.

Errickson used her own parenting experience in the packaging design. Beyond the outer carton’s eye-appeal and window display, she points out the following:

“When a child gets a bump or a bruise, it's the parent's job to get the child to smile again. Your child just got hurt. You're trying to entertain them in some fashion. You run through triage first to determine how serious the accident is, and determine if it's a bump or a bruise. It's really more of a frightening thing than it is a physical for the child, so to alleviate that we wanted part of the visual experience to be bright and colorful. We wanted to give parents an additional tool to help their child regain their composure.”

In previous work Errickson had researched the concept of a paper tube. She found it applicable to the Hyland’s product. Given that Hyland’s wanted a sustainable package, the decision was made to use a paperboard tube.

This tube functions similarly to a lip balm, but is larger in size. The salve-like semisolid topical ointment easily pushed up the former plastic tube, but when Hyland’s decided to go with a paper-based tube the product was reformulated to ensure perfect consistency so that it would remain easy for consumers to use it as if it were in a plastic tube.

Errickson enthusiastically adds that she helped Hyland’s design three different body styles, or characters, for the tube overwrap. “Younger children tend to connect with more gender-specific illustrations, so we launched a girl version, a boy version, and more of a middle-of-the-road version. The digital printing allowed us to do that in a cost-effective fashion.”

Target’s Made to Matter program

Hyland’s use of natural ingredients and sustainable packaging helped 4 Kids Bumps ’n Bruises® with Arnica earn acceptance by Target’s Made to Matter program. This is a partnership between the retailer and now more than 30 producers of industry-altering products and design collaborations that include a group of natural, organic, and sustainable brands. “Target loved the eco-friendly packaging, and they loved the concept of homeopathy in terms of reduced risk to consumers,” says Errickson.

Hyland’s reports that it had a six-month exclusive arrangement with Target to sell the product. The 0.8-oz tube is sold in the three different designs for $8.79. By Jan. 1, 2016, the company plans to ship the ointment to other retailers. At Natural Products Expo East, natural foods retailers enthusiastically embraced the product. Hyland’s says sales haven’t ramped up fully yet, but initial responses show mom’s love the product and the fun packaging.

Definition: “Homeopathy, or homeopathic medicine, is a medical philosophy and practice based on the idea that the body has the ability to heal itself. Homeopathic medicine views symptoms of illness as normal responses of the body as it attempts to regain health.” Source: www.webmd.com

Fun fact: Errickson is also the CEO and Director of Candler, NC-based CoCoChi, Inc., a developer, manufacturer, and distributor of personal care products with organic formulas and sustainable packaging. She’s been featured in Forbes and Business Week.