For a new weight-loss supplement targeted toward men, Robert Parker, owner of Roar Ambition in the U.K., sought a dramatic package format that would help his product stand out in the crowded supplements field. 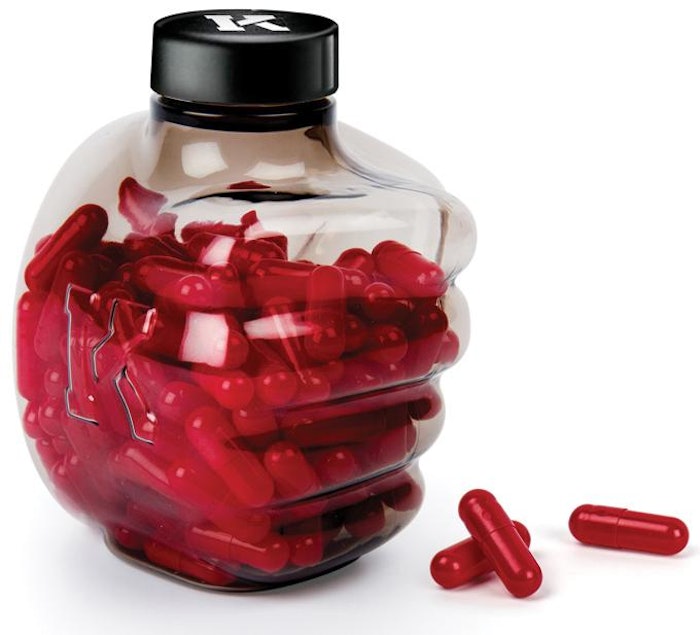 For a new weight-loss supplement targeted toward men, Robert Parker, owner of Roar Ambition in the U.K., sought a dramatic package format that would help his product stand out in the crowded supplements field.

“My goal for Instant Knockout was to make it the number-one fat-burning supplement on the market for these men,” says Parker. “We had spent many months creating, researching, and testing a very effective formula, and I wanted branding and packaging that delivered the same impact as the formula.”

To create that impact, Parker conceived of a clear plastic bottle molded in the shape of a clenched fist that would show off the bright red supplement capsules inside while projecting the product’s “knockout fat” theme. It was intended to be eye-catching and designed specifically to appeal to Roar Ambition’s target demographic: younger men who are already working out but who want help losing that last few pounds of fat. Parker’s partner in the project was Tricor Braun, which worked to design a package that would keep its shape when molded in plastic.

“The TricorBraun designers and I spent a lot of time talking about what was possible, and they would then consult with the bottle blower,” Parker says. “I was very keen to get the bottle perfect, even if it would delay the project. We were pushing the limits of design and blow-molding capability.”

The resulting fist-shaped bottle is made from clear PETG, with a black polypropylene cap. The Instant Knockout logo—the letter K— is printed on the cap and is embossed on the bottle. A tag that hangs on the neck of the bottle also carries the K brand logo, as the bottle itself does not carry a label. The product carton, with a black background, a white logo in a red box, and white and gold copy, was designed by branding agency Robot Food.

Roar Ambition offers Instant Knockout online at its website, with its biggest customer base in the U.S., followed by the U.K., Australia, Canada, and other countries.

Regarding consumers’ acceptance of the new product, Parker says it’s positive: “It’s still early days, but so far the product is selling very well, and we are getting great feedback from the customers about it. They love the eye-catching bottle and powerful formula!”