Weigh In on Symbols for Sterile Barrier Systems

The Sterile Barrier Association needs your feedback. Answer their quick survey by March 29, 2018. 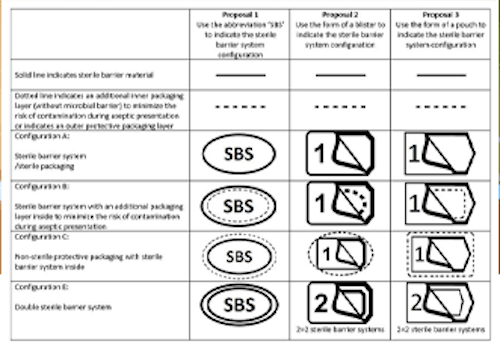 The Sterile Barrier Association (SBA) is seeking feedback from the industry on symbols using solid and dotted lines to denote which layer is the validated sterile barrier.

As we reported a few weeks ago from PharmaPack Europe, the Sterile Barrier Association (SBA) is working on a new symbol to identify sterile barriers in double-layer systems.

At HealthPack 2018, Thierry Wagner, Regulatory Affairs Director for Europe, Middle-East & Africa at DuPont Medical and Pharmaceutical Protection, discussed the changes that the EU Medical Device Regulation (MDR) is making to the General Safety and Performance Requirements (SPRs). There will also be new sterile packaging, labeling and extended documentation requirements.

Answer the survey by March 29 to offer your feedback, as well as ideas and concerns.

The survey is also available in French, German or Dutch, and can be accessed from the news release by selecting which language you’d like: http://www.sterilebarrier.org/news-and-events/2018/january/survey-on-symbols-for-sterile-barrier-systems-ongoing/

A drone system reached fake patients 90 to 120 seconds faster than an ambulance in trials conducted in a busy city in Iraq.
Aug 27th, 2019