The new ESS Model V30M Robotic Tray Packer provides a compact solution for automating the packing of display trays. An authorized FANUC America system integrator, ESS engineered the V30M to use three FANUC robots with ESS-designed, custom end-of-arm tooling (EOAT) to erect and glue display trays, load the trays, and cover them with an HSC cover that is taped to the tray. A servo collation table creates the required pack pattern as bottles enter at a rate of up to 200/min.

The first robot, a FANUC M-10iA/12, picks a tray blank from the magazine and places it in the tray forming device, which folds and glues the bottom of the tray using a Nordson ProBlue 7 hot melt glue system. The tray former discharges the glued tray onto a tray conveyor that carries the tray as it moves to the tucking station where pneumatic assemblies fold and tuck the sides of the tray into place. A FANUC M-20iA robot with custom balloon-style EOAT picks the collated bottles and places them in the tray. The tray indexes through an inspection system that verifies a fully loaded tray.

A second FANUC M-10iA/12 robot with custom EOAT will pick an HSC cover from the high-capacity magazine, square the sides, and place the cover over the bottles and tray. The tray then conveys through the top and bottom taping system that folds and tapes the top of the HSC cover and also tapes the cover to the bottom of the tray. The covered tray is labeled and the label is inspected. All non-compliant trays are automatically rejected from the system.

The V30M uses Allen Bradley CompactLogix PLC controls and a PanelView Plus 1000 color touchscreen. This HMI allows the user to operate the entire system from a single control station. The FANUC robots use compact, Teach Pendant-enabled R-30iB robot controllers. Size changeover can be achieved in 15 min or less. The system can erect, load, and seal 12 to 14 trays/min. 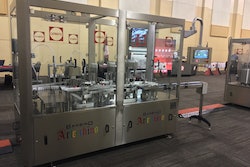 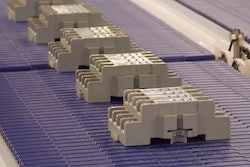 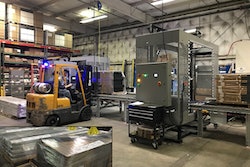