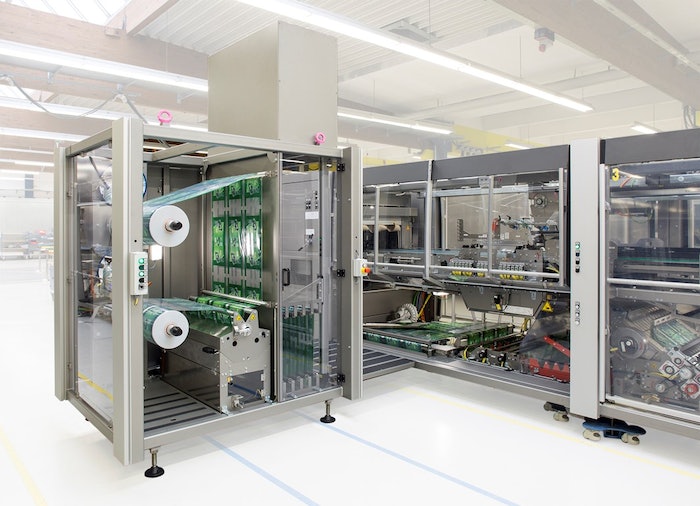 Film reel changeovers without machine stops are possible thanks to the newly developed film storage facility from the Advanced series KHS.

This enables automatic changeovers from one reel to the next on its packaging machinery, and makes it no longer necessary to stop the machine or throttle the production speed.

Inspiration for the system was taken from the automatic reel changers used in the printing industry.

With a machine stop of up to 21 seconds per reel change up to 1.2% more capacity can be achieved per year in two-shift operation.

This new level of efficiency is brought about by a built-in buffer; once the current reel of film has been unraveled to a certain minimum, the storage facility is automatically filled parallel to production.

The switch is triggered by a sensor that scans the diameter of the active film reel and recognizes when a change of reel is imminent. Once the store has been filled and the active reel reduced to the absolute minimum, with clear film the drive stops directly and not at a defined position.

With printed film it stops right at the eye mark. After switching over to the film store, the usual film splicing process begins. This joins the reel, which was previously active to the new one.

Thanks to the size of the storage facility and the short time needed for film splicing there is enough cooling time, thus creating a stable splicing seam. This function can also be retrofitted on existing systems to process shrink film. Adaptations to the machine control system and, depending on the machine version, mechanical and/or electrical conversions are required for operation. There is no need for special electronic components or a separate controller.

A global pharmaceutical company improved output speed for 4-side-seal sachets of laxative powders by selecting a new packaging line—complete with remote installation. The system compacts stacks of sachets before transferring them to the cartoning machine.
Keren Sookne
Dec 1st, 2020
More in Packaging/Filling