Despite attaining maturity in developed regions and cost issues, implantables are predicted to grow worldwide, says a new report. 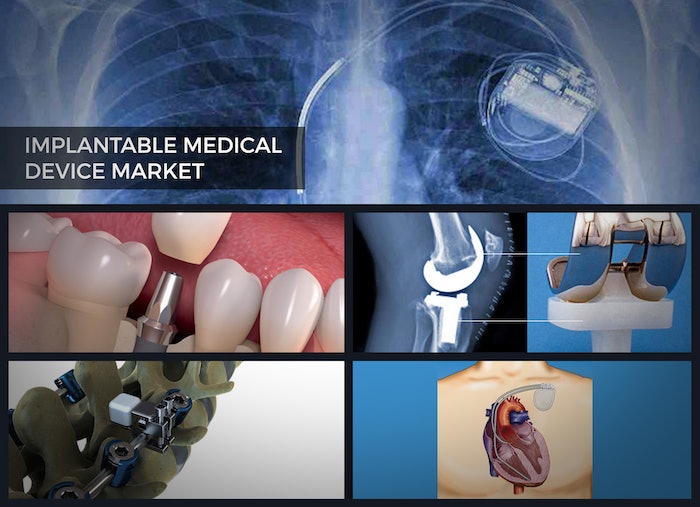 Despite attaining maturity in developed regions and cost issues, implantables are predicted to grow worldwide, says a new report.

These are among the findings of a new “Implantable Medical Devices Market Report.”

North America accounted for nearly half of the global market share in 2015, and is projected to maintain its dominance during the forecast period.

AMR expects cardiovascular implants to grow at a CAGR of 6.5% from 2016 to 2022. Growth here is attributable to the rising prevalence of cardiovascular disorders (CVD), technological innovations, an increasing geriatric population and favorable reimbursement policies by government and healthcare agencies.

The other implants segment is expected to register the fastest CAGR of 10.6% during the forecast period, due to increase in prevalence of neurological diseases, craniomaxillofacial deformities, and eye disorders, and a preference for cosmetic surgeries.

The U.S. was the major contributor to the revenue of the North American market due to growing awareness about the use of medical implants and high prevalence of chronic diseases in the region. Although the market has attained maturity due to the widespread adoption of these devices over the past few years, the introduction of technologically advanced devices is expected to provide ample scope for future market growth.

Key findings of implantable medical devices market include the following:

The Asia-Pacific region is projected to show the fastest growth rate during the forecast period due to high demand for medical implants, healthcare reforms for infrastructure development, and high prevalence of chronic diseases. In addition, growing awareness about the benefits and availability of implantable devices and presence of high unmet needs in the emerging markets, such as India and China, drive the market.