3rd Serialization Roundtable For CMO’s’ delivers education to a pharmaceutical industry in need. 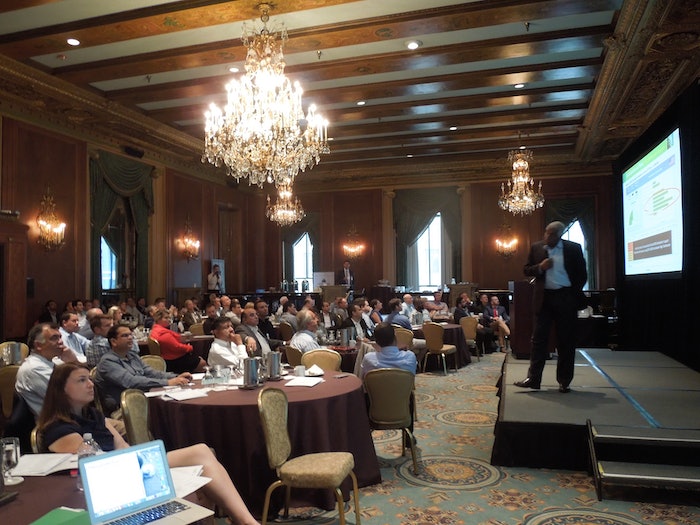 Jeremy Tatum didn’t mince words when asked how to motivate pharmaceutical manufacturers and contract manufacturing organizations to comply with the Nov. 27, 2017 deadline by which drugs must be serialized by manufacturers: “Don’t serialize, and you can’t sell your products.”

Also taking a glass half-full approach to serialization was Mario Simard, Senior Product Line Manager at Optel Vision. He noted, “There’s an opportunity even for those companies that have not yet started serialization because it can be 15 to 30 percent less expensive to implement serialization and aggregation at the same time,” rather than addressing serialization now, then waiting until the aggregation phase of U.S. Drug Supply Chain Security Act (DSCSA) regulations takes effect.

Simard estimated there are 15,000 global packaging lines that need to be made “serialization-ready,” during the “3rd Serialization Roundtable For CMOs,” held Aug. 30-31 in Chicago and organized by Optel Vision and Supply Chain Wizard.

The pharmaceutical community has a long way to go to become serialization-compliant, which isn’t surprising given the complexities serialization presents, but it is alarming. Event organizers noted there’s “not been as much progress as we’d like,” attributing the slow start to serialization compliance to factors such as a lack of capital commitment and understanding of the technical aspects of the process. They noted the aim of the event was to help CMOs and the pharmaceutical community moving forward.

After serialization roundtable events in Philadelphia in 2015 and in Frankfurt, Germany earlier this year, the message in Chicago was clear: CMOs and pharmaceutical manufacturers have timelines that have to be bridged and need to address them as soon as possible.

Rick Bollinger, Optel Vision’s VP of Sales, North America explained, “We need open communication between partners throughout the supply chain. Communication breeds success and education is a key to that.”

Teva Pharmaceutical Industries Ltd., based in Israel and producer of generic drugs, specialty pharmaceuticals and active pharmaceutical ingredients, is a good example of a serialization-challenged company.

At the Chicago event, Vivian McCain, VP, Third Party Operations, Americas, bluntly stated, “Serialization has not come along as well as we hoped. We need to address how do we move the needle and get this thing done? We have more than 800 CMOs/external suppliers of our products. Nearly all of them rank near the bottom of the scale in terms of their state of readiness with 15 months left before the November 2017 deadline. That makes me nervous; it’s a huge mountain to climb. We’ve known about serialization for years and we cannot put our patients at risk.”

To “move the needle,” McCain explained the company is working with Supply Chain Wizard and with cross-functional teams, both internally and with external partners throughout the supply chain to better understand the regulatory issues, size, scope and challenges of serialization. “We’re not where we need to be,” he said. "We need to motivate each other, share knowledge, and get this done in time and within budget.”

Endo’s Tatum noted, “We rely heavily on CMOs and there’s a need to serialize all products, which is complicated as we have different packaging for different products and pallet sizes. Our plan is to aggregate as soon as we serialize. That way, we can take down one line at a time, and do it once rather than equip a line for serialization and then a second time for aggregation. We have a cross-functional steering committee and set up our goals much like ‘swim’ lanes, each of which have specific objectives. Like Michael Phelps showed again in the Olympics, speed and efficiency are important. So is selecting the right partners; in our case, that’s Optel Vision and Supply Chain Wizard. They’re here for us, they have the tools and the supplier portal we need. We have to be flexible and transparent in order to keep our customers in the loop so we can communicate with them should there be any potential delays. That helps all of us be successful.”

• Something as simple as identifying the correct contact person within IT can be challenging, noted a panelist from Teva, Israel. “With IT, it’s never smooth.”

• Education exchange is key as we all need to share the same understanding of basic terms with all our partners, something that isn’t always the case, said a panelist with a pharmaceutical manufacturer.

• A panelist representing a pharmaceutical manufacturer and CMO said, “You need to understand the complexity and depth of your company’s product mix, including every product on every line. Look for families and groups. Simplifying these by using standard processes can help rationalize and simplify your packaging designs.

“Also, know up front how often you rework product. It happens at CMOs and with manufacturers. Recognize that this process changes when there are serialization numbers. You need to maintain the integrity of data. At our own manufacturing sites we have changed some internal products for better line efficiency. That is the best way to make sure your data is clean and real at the end of the batch. Do not assume automation reduces or eliminates human error. Moving to an automated case packer, for example, can be costly and complex in terms of the integration of serialization.”

Prior to federal DSCSA legislation, serialization changes and deadlines fluctuated, creating a “we have time to address this” mentality among some in the pharmaceutical community. The financial commitment, which can ultimately run into the millions of dollars, can also be hard to justify to management. Add to that the ongoing technological developments and connecting multiple systems and equipment from multiple vendors and supply chain partners at different functional levels and it’s easy to understand why manufacturers and CMOs may be hesitant to begin or finalize serialization efforts.

And then there’s a crucial concern about how serialization and aggregation compliance can reduce packaging line efficiency. To that end, the Teva Israel panelist noted, “Our OEE was severely impacted due to the technology we selected initially, but we don’t envision a huge impact in the future.”

Responding to an audience question, the Teva panelist said, “We’ve seen no impact as far as printing, though we’ll find out more when we aggregate. We manually label shippers. We will go to print-and-apply labeling and that will have an impact. Some companies have lost up to 40 percent of their efficiencies; we see about a 20 percent loss.”

Evren Ozkaya, Founder and CEO of Supply Chain Wizard, suggested U.S. firms learn from Turkey, which he said, “Was the first country to implement serialization and is still the only country with 100-percent track and trace.”

He noted, “Reduced OEE can impact serialization. Stoppages on new lines can reduce efficiency.” Master data management and maintenance add further challenges and potentially costs with added labor, hardware and software expenditures. “You need to plan for this so you can prevent price increases for your customers.”

It’s easy to be discouraged by thinking of serialization in terms of traditional return on investment in that the financial outlay is not to increase production output, speed, or to decrease labor costs, but to comply with laws. Yet, if CMOs and companies don’t pass serialization and aggregation costs along, can they remain profitable? Can they stay in business?

Ozkaya pointed to some key benefits of serialization implementation in Turkey, where the country’s track-and-trace efforts made major inroads in addressing insurance fraud and helped prevent pharmacies from potentially giving out incorrect medicines. In at least one instance, batches from different packaging lines printed with the same numbers were identified and product was recalled.

“Fifty-five percent of CMOs today are not ready for serialization; 45% of the CMOs have started serialization,” he noted. He recommended companies determine what resources they have, and identify what will be required on the IT level. He asked the audience to consider further questions, such as, “Which line should you serialize first? Should you rearrange your lines? Should you use modules or preconfigured solutions? Should you retrofit your lines or add new machinery? If the latter, you’d better jump in soon.”

Simard offered more questions: “Can you integrate OEM machinery serialization systems with your company’s overall systems? Can you achieve serialization and aggregation requirements with the same software or will it require additional investments?” He advised, “The earlier your company trains operators, the better. It could benefit your company to train one dedicated person as the serialization expert so he or she can troubleshoot easily and train others.”