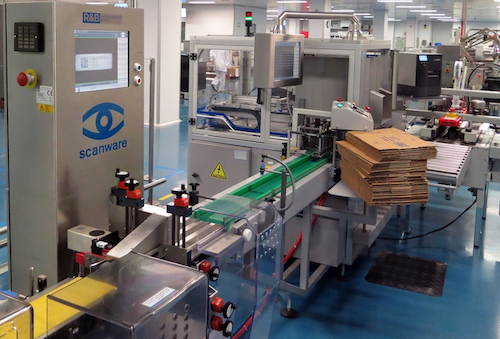 Aimed at addressing pharmaceutical security in Brazil, ANVISA regulations require packaging units to be marked with a serial number, product registration identification, GTIN, lot number, date of production, expiry date as well as a DataMatrix code encoded with these details, providing a trail of the unit through the logistics chain, from a single box to a pallet, including the companies involved.

Meeting track-and-trace requirements pose a challenge, both technically and logistically. It was announced in late 2014 that Libbs became involved in a pilot program with track-and-trace turnkey provider Rastreabilidade Brasil (RB), and track-and-trace software supplier Atlantic Zeiser. The project has been established to demonstrate the implementation of the ANVISA resolution.

Libbs has taken up this service for one of its packaging lines. In turn, RB engaged partners for the application at the packaging line and traceability, one of which is scanware electronic GmbH.

“RB was looking for a mark and verify solution for folding boxes on the packaging line. The scanware station, LYNX‐CAPA MV, has been chosen for marking and verification due to its flexible construction and usability,” says Andreas Jamin, who supervised the project at scanware.

Folding boxes are printed and the print is verified. At the next step, codes of all boxes within a shipper case are inspected. Scanware is in charge of the inspection and evaluation of data, using LYNX‐CAPA CI. For data handling both at the packaging line and during distribution, RB approached Atlantic Zeiser.

A turnkey solution was been delivered in which the software of Atlantic Zeiser and the hardware of scanware work in unison. On October 8, the pilot scheme was presented to the public at an event in São Paulo. Brazilian Minister of Health, Arthur Chioro, representatives of pharmaceutical associations, invited pharmaceutical producers, the directorate of ANIVSA, and a top‐ranking official of a governmental bank witnessed the proceedings.

During the event, the system was introduced under ongoing production conditions and complete traceability of the product through the distribution chain was established in a pharmacy in Brasília.

Libbs’ website, www.libbs.com/br, notes that the company “operates a modern, state-of-the art industrial plant located in the city of Embu, in the state of São Paulo. The company has over 80 brands and 180 presentations.”

Editor’s note: This story was based on Dec. 19, 2014 press release from scanware electronic GmbH

His accomplished 50+ year career blended art, and design and engineering in packaging, and spanned multiple market signets and disciplines.
May 26th, 2020

Sub-assembly and final assembly equipment to be supplied by Stevanato Group Operations in Denmark in preparation for global launching.
Oct 9th, 2019
More in Package design