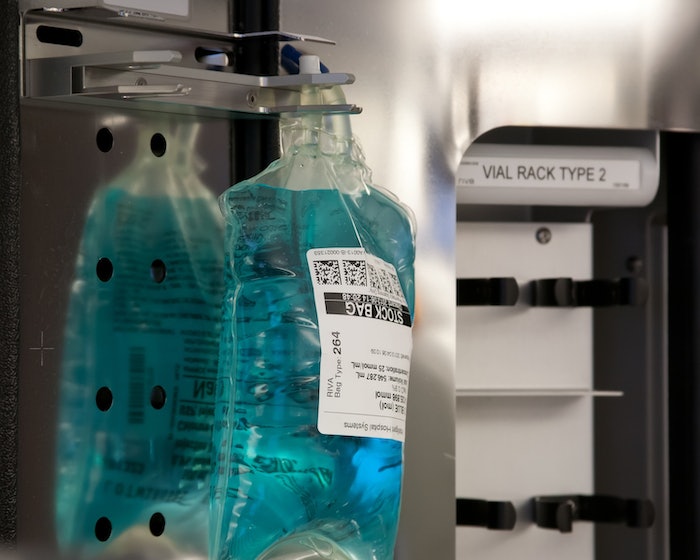 The self-contained equipment, located in a cleanroom, automatically compounds IV syringes or bags for improved patient safety, productivity and efficiency.

“In all candor, the Greenville Health System already has a reputation for using cutting-edge technology,” says Richard Capps, GHS pharmacy manager. “With the RIVA systems, we have again embraced that philosophy, which fits into our efforts to seek a safer, better way of doing things to improve patient care. Our first priority is always quality; cost is important but secondary.”

Capps, however, won’t label the substantial investment in the RIVA systems as futuristic. “I wouldn’t use that term because to me it’s the here and now,” he says. “To me this is how we ought to be doing it today.”

Thom Doherty, chief technology officer of IH Systems and one of RIVA’s inventors, says there are approximately 35 installations of the RIVA system worldwide, with most of them in the U.S. The first system was installed commercially at an Orange County, CA, pediatric hospital in late 2008.

According to the company’s website, “RIVA, a fully automated IV compounding system, is a [Class II] medical device…used by hospital pharmacies to automatically and accurately prepare IV syringes and bags. By automating the preparation of IV syringes and bags, RIVA addresses the issues of safety for the patient and the pharmacy technician, efficiency and effectiveness in the pharmacy, and the challenges of a changing regulatory environment.

“RIVA allows hospital pharmacies to compound aseptic preparations in a USP <797> compliant environment while outputting admixtures in either syringes or bags. The automation of repetitive and complex tasks reduces the incidence of errors and contamination. RIVA can prepare both chemotherapeutic and non-chemotherapeutic doses.”

At its five locations, GHS has some 1,200 beds total, providing patients with everything from acute to long-term care, and caring for patient populations with unique needs, including pediatrics and oncology.

Capps explains that the GHS central pharmacy is open 24/7. Currently, the pharmacy’s compounding operations are completed manually on-site or outsourced. Bringing much of the process in-house with RIVA was appealing in that it would give GHS control of the process, address patient safety issues and improve internal processes.

“Everything produced at the new compounding pharmacy is for use in the various GHS hospitals,” Capps confirms. “This model is 100-percent based on taking care of our patients.”

The issue of patient safety was ratcheted up another notch as a result of the New England Compounding Center saga. Says Capps, “One part of my job is to pay attention to what’s going on in the industry. We had actually done some homework a couple of years ago to look at automated compounding, but made the decision that the timing wasn’t right. The NECC disaster changed the picture significantly, causing us to re-examine opportunities to insource some of our batch sterile compounding processes. We felt it would be a good idea to investigate automation since it would benefit us and the system.”
Employing the RIVA units gives GHS the benefit of compounding and filling syringes and IV bags to produce needed products in advance, with longer shelf life.

“Let’s say we need to add one gram of a drug to an IV bag. We do that all the time. We aseptically reconstitute the drug, inject it into the bag and it’s ready to go. But without RIVA, we can only give it a couple of days dating because it’s for immediate use by a patient. If they don’t use it quickly we discard the preparation,” Capps explains. “Using the RIVA systems, we can do the compounding automatically and it will be usable for a month. We don’t do that for everything—only for things that are needed urgently or on a routine basis. But it’s the idea that we can make it and it will be there when it’s needed.”

So, how did GHS learn about the RIVA system? “I was aware of one other system, but in my opinion, the RIVA met the niche that we were looking for. IH Systems provides so much expertise and we felt they could help us do the absolute best job we could to provide a good, quality product. And instead of looking at purchasing a single RIVA, we actually opted to go with two of them so that we would be able to meet all of our current needs, yet still address future growth. That’s the path we chose after working on this development project for more than a year and a half.”

During the project’s planning, GHS realized that because of its uniqueness, scale, and cleanroom needs, there really wasn’t room to install RIVA technology at the existing main campus, which is actually inside the hospital. “So instead, we built a dedicated facility just for the RIVA systems, and it’s located within another GHS facility about 12 miles away,” says Capps.

“The advantage of building this compounding pharmacy inside of an existing space is that we have good security and we can control the airflow and air quality better.” Each RIVA’s footprint measures approximately five by ten feet wide and eight feet tall.

The new facility and RIVA systems will prepare IV products for all the different GHS campuses. But Capps indicates the plan isn’t to run the facility 24/7. “The purpose of using the two RIVA systems is that it allows us to manage our workflow within a reasonable time. In fact, the goal is to keep our new compounding center running Monday through Friday if possible,” he says. GHS plans to staff the compounding center with four full-time people – a pharmacist and three technicians – who will do other work as well as operate RIVA.

Asked what output these systems will provide, Capps explains it will depend on multiple variables: “If we’re doing syringes, it is most efficient to make them in one stage, and do IV bags separately. We plan to develop a work schedule and have one RIVA focus on syringes, and the other produce IV bags. As with anything, once you start doing it yourself you make some tweaks and customize the schedule to run what you need.”

To be clear, each RIVA system can produce syringes and bags. Capps says while the equipment can produce smaller doses, for GHS it will handle syringes with fills ranging from 3 to 60 mL. Bags will likely include from 50 to 500 mL of product.

GHS’ expenditures for the new pharmacy – including RIVA technology, project costs and construction – are several million dollars, an investment Capps ultimately considers to be worthwhile. “We believe these are safe and cost-effective systems,” he says. “That doesn’t mean the minute we open the doors to the new compounding center we’re saving money because we have to pay for equipment. But we know the systems give us more flexibility.

“And if you’ve been paying attention to drug shortage issues, you know that they can cause a significant problem for hospital pharmacies. We look at issues like that and realize we are fortunate because we will be able to accommodate a shortage much faster with the RIVAs. It gives us more control – which will also help somewhat in cost containment.”

Benefits of the RIVA technology touted by both IH Systems and GHS include the following:

• For a detailed look at the RIVA components and process, see “How RIVA works.”

• Watch a video demonstration of the RIVA Robotic IV Automation.