The WHO works to set up healthcare in remote areas to deliver much-needed vaccines. Organizations and equipment suppliers must rise to meet the challenges that come with the climate and infrastructure in these locations to ensure vaccines stay within approved temperature ranges. 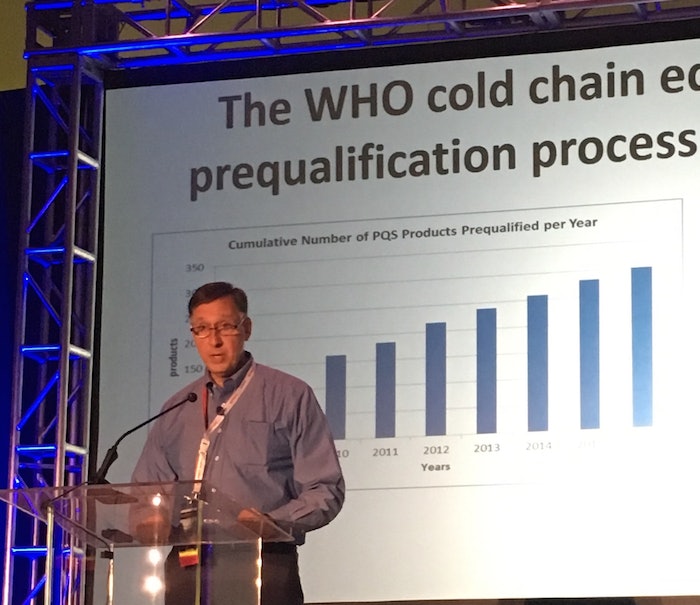 Geoffrey Glauser played a key role working with the Center for Disease Control (CDC) in Sierra Leone on a Phase 2-3 clinical trial for the Ebola vaccine.

The WHO has a significant presence in emerging countries and continues to tackle challenges associated with bringing healthcare and vaccinations to remote areas of the world.

Geoffrey Glauser is a subject matter expert in support of the Manufacturing, Facilities, and Engineering Division of the Biomedical Advancement Research Development Authority (BARDA) in the Office of the Assistant Secretary for Preparedness and Response (ASPR) within Health and Human Services (HHS). Recently, he played a key role working with the Center for Disease Control (CDC) in Sierra Leone on a Phase 2-3 clinical trial for the Ebola vaccine.

At this week’s IQPC 14th Cold Chain - GDP & Temperature Management Logistics Global Forum in Boston, he explained that what he and the CDC accomplished in the area of Ebola prevention was a “trial by fire” in Sub-Saharan Africa, learning as they went to complete the clinical trial under extreme conditions.

“The task [people] have is certainly not simple,” Glauser noted. People must bring in resources and standards, and educate. The basics of water and electricity are limited. “It’s not enough to just have cell phone service.”

There were power outages and minimal grid cover, and only 12 percent of roads were paved. He explained that they rose to the challenge, never losing a dose of the -80°C vaccination despite the lack of dry ice.

Glauser outlined the WHO’s equipment prequalification process and implementation strategies that address the unique challenges in emerging countries. He recommended that companies involved in cold chain operations in emerging markets consider the following:

It’s extremely important that you do not overlook human factors. The local ministry of health must be involved from the start—they have their own requirements and standards, as do other aid organizations like UNICEF. You may need to keep the local leader(s) happy, and will ultimately teach locals how to perform vaccine storage and equipment maintenance. Glauser said that the local leaders and healthcare providers want to be in charge as much as anybody, and it’s our job to make sure they are educated and self-sustaining.

Public health education is also a critical component in emerging countries. Ebola is more difficult to transmit than many think, as it requires contact. Much of limiting the spread of the disease comes down to education, and Glauser urged attended to view and share the massive number of educational activities related to public health at WHO.