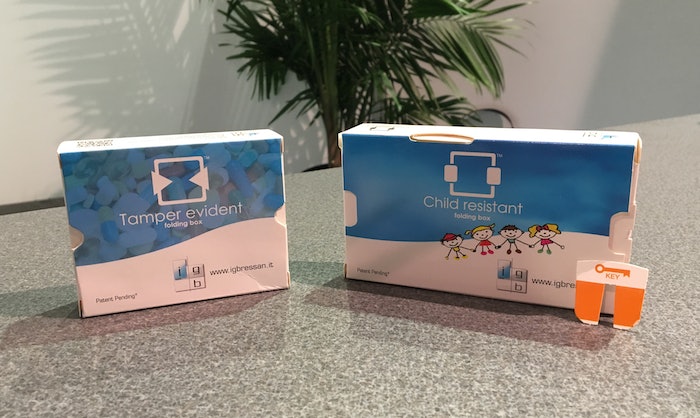 When the Tamper Evident box is opened, a red tab appears on the side of the box letting you know it has been opened. The tab can also be altered to feel rough so that blind customers can be notified of tampering. One of the goals of this product is to reduce “employee pilferage,” an issue that has constituted the largest single percentage of pharmacy thefts nationwide. The boxes are created without glue or labels which makes them efficient and compliant in the US and Australia.

The Child Resistant box comes with an actual key that is stored in the side of the box. Simply remove the key, insert it into the tab, and the box magically opens. Between 2004 and 2013, 640,000 children aged 5 and younger were treated in the emergency room for ingesting drugs in the U.S. alone. This product provides a solution to that issue without disrupting the production flow. The boxes are designed to be mass-packaged on standard packaging lines without machinery investments or special components like shells or trays.

The Recreational Marijuana box is designed to be both tamper evident and child resistant because many states require both. Simply slide a credit card into the side of the box where prompted to release the internal box that slides out. Once removed, the internal box contains a secondary security measure with the tamper evident tab.