According to Hamburg, Germany-based Kühne, its delicatessen food products are “Made with Love.” They are also made with a laser focus on high efficiency, in both product and packaging processes. Since 1722, the family-owned business has been developing innovations in food that reflect the nutritional and cooking habits of their time. Among Kühne’s current offerings—many of which are category leaders—are vinegar and dressings, gherkins, sauces and mustard, cabbage and sauerkraut, vegetables and antipasti, and “better-for-you” baked vegetable snacks sold through retail and foodservice.

In July 2020, the company installed two new robotic case-packing lines from Gerhard Schubert GmbH for its remoulades, barbecue sauces, and salad dressings to achieve the speed and flexibility needed for its different package formats. The new machines feature Schubert’s digital customer platform and industrial gateway, which provide analysis of key production figures that can improve OEE (Overall Equipment Efficiency) and allow Schubert to monitor the machines to improve efficiency as well as recommend preventative maintenance measures.

With the installation of the two new lines, Kühne switched from case packing via a traditional grouping chain to robotics. Explains Andreas Keller, Sales Account Manager at Schubert, “Due to the high noise level and risk of breakage, the production managers at Kühne wanted an alternative to the grouping chain.”

One of the two robotic case packing systems from Schubert handles six formats of Made for Meat barbecue sauce (shown) and salad dressings in glass bottles.Schubert’s TLM packaging machines comprise modules that each handle a different function of the packaging process via robotics, while its Transmodul single-axis transport robot runs on a rail system that passes through all the sub-machines. At each end of the rail section, a turning unit on the Transmodul enables unloaded modules to travel back to the other end on the lower track. To hold items in place during transport, the Transmodul is equipped with a vacuum blower. Data and signals are transmitted wirelessly.

The decision by Kühne to purchase two new lines was driven by the different performance levels of the upstream filling stations. The first line packs two sizes of remoulade jars, while the second handles six formats of the company’s Made for Meat barbecue sauces and its vinaigrette salad dressings, packed in round glass bottles. On both lines, the packaging process takes place in counterflow.

During operation of the first line, the process begins when two case blanks at a time are destacked by an F3 three-axis robot, specially designed by Schubert to remove materials from a magazine. The cases are then erected and placed on the Transmodul transport robot by an F2 robot. The F2 is controlled by two servomotors and can carry out any movements in a 2D working field of approximately 3.9 x 2.6 ft. 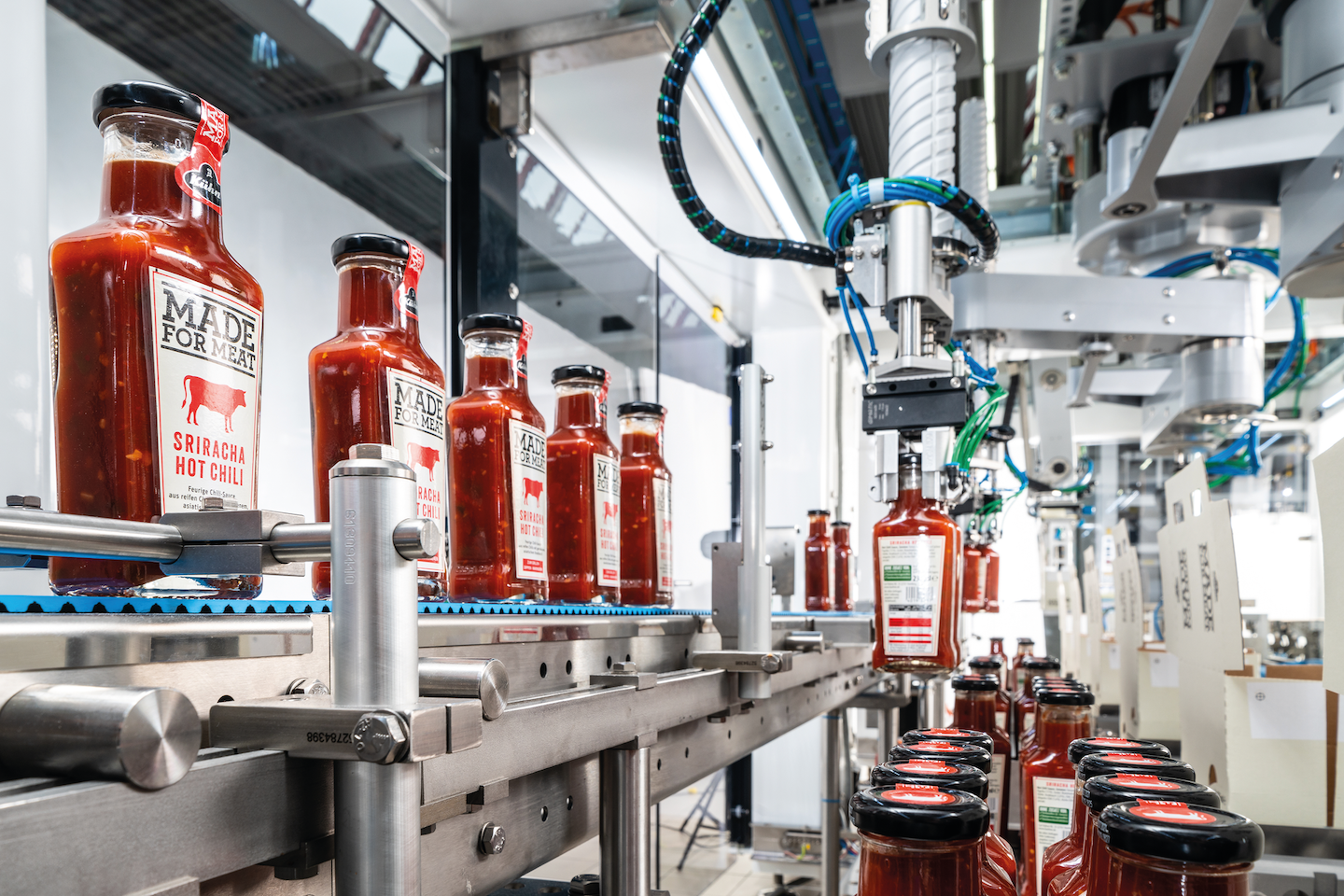 The second line operates in the same way, the exception being that there are just two F4 robots in the case-filling station, in contrast to the four used in the first line. The line operates at speeds to 120/min.

According to Keller, the robotic system has solved challenges Kühne had been experiencing with changeover time with its former systems. With the previous equipment, he says, format changes—for example from remoulade jars to sauce bottles—had to be scheduled around two shifts. The flexible TLM solution handles changeover in a maximum of 20 minutes, without tools, including changeover of the grippers of the F4 robots for the products (with bayonet lock), the magazine plates, the box folding frames, and the Transmodul pick-up plates.

Integrated into every new robot-based TLM packaging system, including those purchased by Kühne, is Schubert’s industrial gateway, GS.Gate, as well as its GRIPS.world customer platform. Says Schubert, “Big Data is the new currency in the packaging industry, as well as everywhere else. But storing machine data alone is not enough. If you want to profit from sustainable packaging machines, you need a meaningful analysis of the important key figures and 100% protection against attacks from the Internet.”

As Schubert explains, its GS.Gate gateway evaluates all machine data and networks the Kühne lines with the GRIPS.world digital platform “while adhering to the highest security standards.” Based on the current production data and reports that are generated automatically on a weekly basis, Kühne can identify potential areas for optimization across the entire packaging process. For example, the targeted analysis of error messages can increase machine availability. 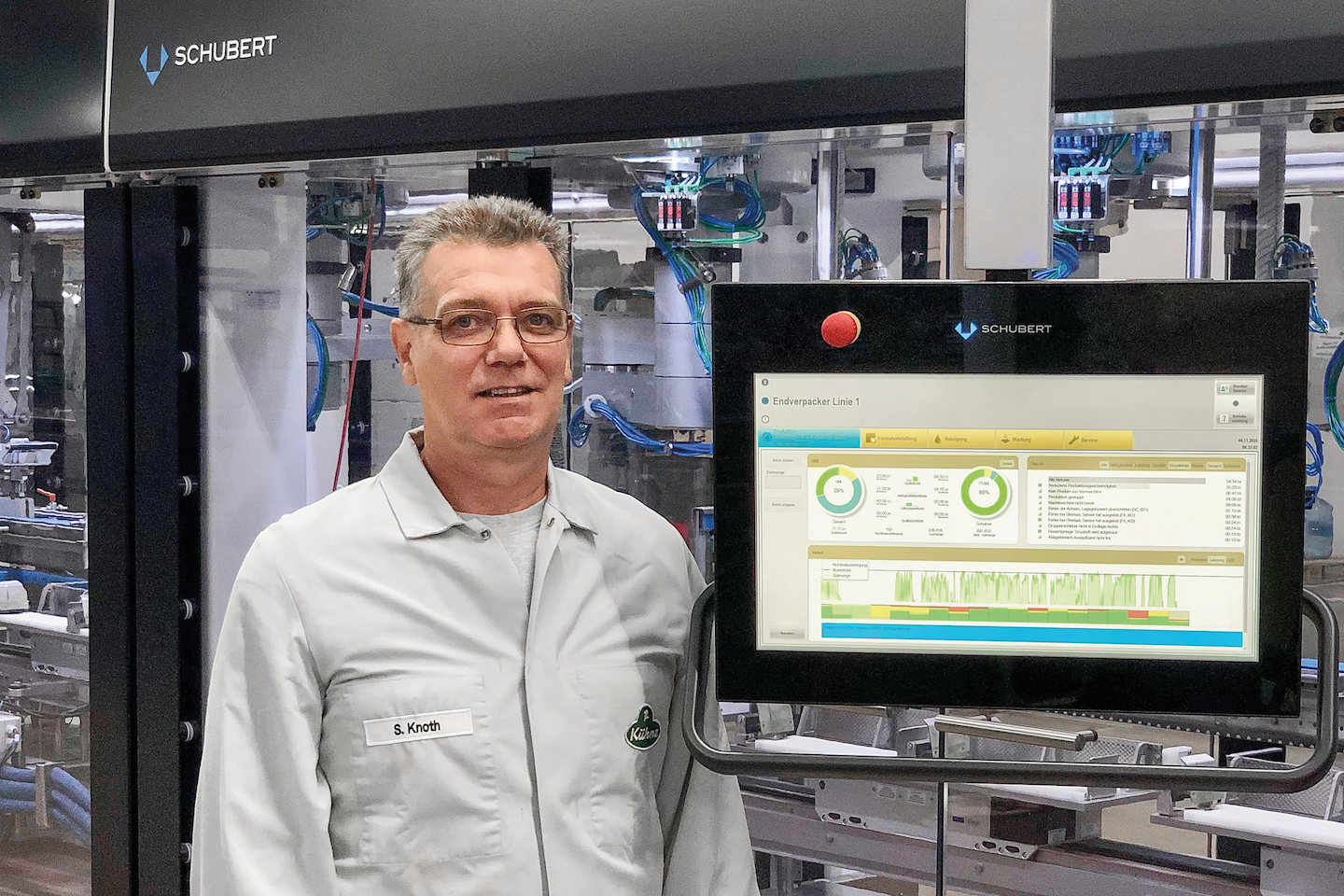 According to Stefan Knoth, Technical Support at Kühne, the GRIPS.world industrial gateway has helped the company increase OEE by 20%.Until it acquired the new case-packing machines, Kühne used an OEE calculation program for its production meetings, with part of the data acquired from records kept by machine operators on individual production lines. However, these records did not consistently list the interruption times because the elimination of a malfunction naturally took priority over the documentation process for the machine operators. This resulted in certain inaccuracies in the documentation, which the company urgently wanted to minimize. To this end, Kühne and Schubert are now working hand in hand on a new type of evaluation, as Kühne has allowed Schubert access to the platform.

Says Stefan Knoth, Technical Support at Kühne, “Compared with our previous method, it is a real advantage that we now have a tool that automatically records the reasons for disruptions and downtimes. The weekly report provided by Schubert for this purpose provides an initial overview of the entire line’s performance. Detailed statements are possible with the program’s extensive analysis functions. Another highlight is the ECO dashboard for recording and evaluating power and compressed air consumption. This allows us to provide detailed data to our energy management system.”

He also sees the possibility of exporting the processed data as a useful add-on and using it for further evaluations. “In the future, together with Schubert’s system development department, we intend to integrate further upstream and downstream machines into the system to process error messages from these systems as plain text in real time,” he says. “We now have a powerful tool that provides us with excellent support in systems analysis and increased overall line effectiveness.

“We are already achieving 20% more output than before, according to the OEE evaluation. The Schubert family has done an excellent job.”