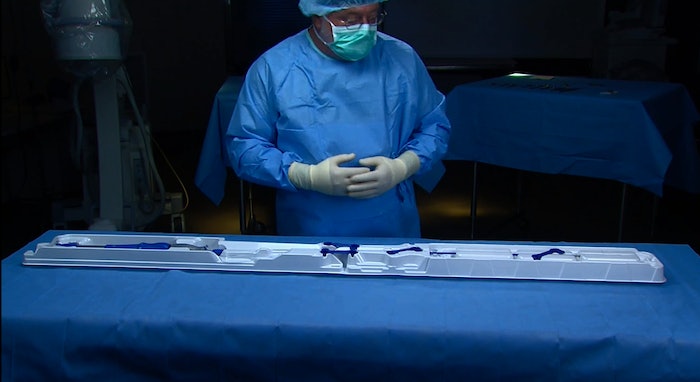 Prent Corp. thermoformed the TAVI system’s 0.040-in. thick tray and clips, using white Tritan™ PETG resin from Eastman. “Prent has a good design team that can articulate what we as a customer require,” says David Clarke, Packaging Engineering Supervisor, Medtronic Vascular Galway Ltd., in Ireland. “They are consumer-focused and use cutting-edge equipment.”

Medtronic explains that TAVI is a relatively new valve technology developed in the first part of the 21st century as a means of treating sick patients who otherwise would not receive valve replacement therapy through surgical means. The first commercial products reached the market in 2007.

Clarke explains that Medtronic involved its Packaging and Labeling, Research and Development, Quality, Marketing, and Human Factors departments in the design and development of EnVeo R. The medical device manufacturer also employed end-user input in the development process. Says Clarke, “An ethnography-based innovative tray package is integral to the device therapy.”

EnVeo R has been sold commercially in Europe (where it’s CE-marked), Latin America, Australia, New Zealand, and other countries since September 2014.

Clarke points out that the product employs, “a novel innovative packaging design. This packaging system defines new frontiers in the medical device field by integrating material, with end-use customer-focused features that enable the package as a value-add to the overall therapy,” he says.

EnVeo R consists of a porcine tissue valve on a nitinol frame; its heart valve is delivered via a sophisticated catheter delivery system using a minimally invasive technique. It has the ability to recapture the valve prior to full release and a packaging configuration that provides a single user with complete control of the 62-in.-long catheter and additional functionality during the preparation and loading of the valve onto the catheter. The packaging system consists of a tray in a single pouch housed inside a paperboard carton. The premade pouch structure is 20-mm oriented polyamide (nylon)x2/50-mm polyethylene, and is supplied by Steripack Ireland.

In comparison to its predecessor, the EnVeo R packaging configuration represents a leap in tray functionality along with a focus on optimizing packaging components and materials. The design team took the opportunity to go the “Gemba” (Japanese for “the real place”) to see the current generation product in use and solicit feedback from key stakeholders in the lifecycle of the packaging configuration.

One major need identified was to add functionality to the tray housing the catheter within the sterile field. The team also sought to reduce packaging components and waste where possible. A new pouch configuration was developed that moved to a single pouch as opposed to the previous double pouch configuration. In order to optimize the tray design, finite element analysis (FEA) techniques were adopted to implement features on the tray, which ensured robustness prior to manufacture. The use of FEA helped to accelerate packaging development cycle by four and a half months and resulted in meeting project timelines.

The result, says Medtronic, “was a revolution in packaging design for the TAVI space. The ease of handling in the Cathlab [operating room] was improved through the single pouch configuration. The added functionality of the tray removed unnecessary clutter and tasks from the catheter loading team and helped to streamline the valve preparation and loading process. Visual aids added to the tray design assisted in successful loading of the valve to the catheter,” the company says.

Medtronic believes that by using ethnography for contextual observation, Gemba, and “voice of customer” activities of end users, its design team “pushed the boundaries of the tray design and functional requirements. “No longer was the tray seen as throwaway packaging in the Cathlab, but as an essential part of the user experience and improving the quality of the overall product for safe and effective use,” says the company.

At the Cathlab, trays are manually filled with saline. And while the tray is not labeled with technical information, a “mirror label” is pre-attached to the bath section. This is a reflective label that allows the operator to see under the catheter when loading the valve in the saline. The pressure-sensitive labels are supplied by both Advanced Web and Sealpack.

Medtronic uses a distribution box to hold four packaged products. A pallet holds 18 shipping cases, or 72 units, in all. Sterilization is conducted via ethylene oxide (Et0) gas, and shipped to final customers—hospitals and clinics—either via a single parcel or in bulk quantities.