North Korea’s newest counterfeit product is “Neo-Viagra,” and curing impotence is just one of its benefits. 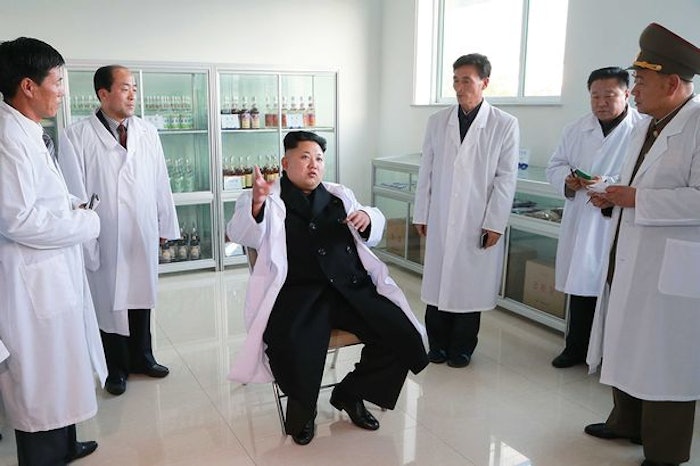 Kim Jong Un with a team of doctors / Photo: http://www.mirror.co.uk/

A recent article from Business Insider takes a look at North Korea's new counterfeit Viagra. Although similar in function, the two drugs look nothing alike – Viagra is the signature blue pill, while North Korea’s “Neo-Viagra” comes in brown granules. Viagra's maker, Pfizer, tested the North Korean version and found that it contains around 50-milligrams of the active synthetic ingredient, sildenafil. Name brand Viagra is available in 25, 50, and 100 milligram doses.

But Neo-Viagra’s benefits aren’t limited to treating male and female patients; according to the article, it “also claims to relieve back, shoulder and knee pain, ease paralysis, and alleviate “kidney malfunction, sciatic neuralgia, high blood pressure and brain artery hardening.” The knockoff “herbal medicine” is being sold in North Korea for between $12 and $15, and is ready for export. While traces of the drug have appeared in China, it's unlikely to hit the American market, according to the article.