When a pharmaceutical manufacturer could not find a machine to fit their needs, they found a collaborative and innovative partner. 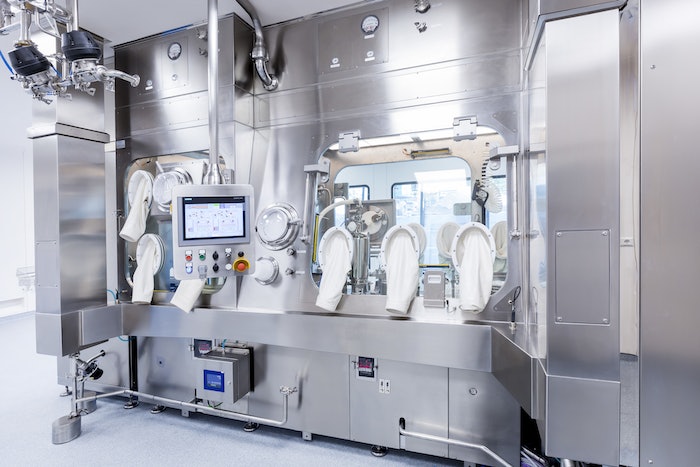 Steriline’s RVFCM50 Robotic Vial Filling and Capping Machine features glove ports on either side of the machine to allow for complete access to the line.

Dwight You, Head of Production at AqVida GmbH, stood proudly in front of a robotic filling line at the Steriline booth at Pharma EXPO 2016 in Chicago. Encased in an isolator, the robotic arms in the machine moved vials smoothly from the turntable through filling, capping and crimping before exiting the line.

It’s not unusual to see robotics in packaging operations such as case packing and palletizing. In fact, PMMI’s recent Pharmaceutical and Medical Devices: TRENDS & OPPORTUNITIES IN PACKAGING OPERATIONS reports that two thirds of companies surveyed are currently using robotics—mostly in packaging—and over 50% predict they will install more in the future.

But operations like aseptic filling and capping are precise tasks with many nuances. The use of robotics in these steps is not something seen every day in the pharmaceutical sphere.

The search for a robotic system

After using contract manufacturers for years, AqVida, a leader in producing oncology drugs in Germany, began designing a new dedicated facility for filling sterile parenteral injections. At the Dassow, Germany, site, the company planned to streamline the process and equipment to minimize cytotoxic exposure to operators and to maximize product quality.

As head of production, Dwight You and his counterpart in the quality department had many years of site audits under their belts. They knew they wanted to avoid format-changing time between different sizes of vials, which took several hours to complete.

“If you want to fill your bulk solution into several different vial sizes, it will cost you almost half a day of work to change format parts,” Mr. You explains. This extends the duration of time in which the entire line must remain sterile. “With so much human operation necessary to change formats within the isolator, the probability for mistakes, contamination and exposure is just too high. We wanted to minimize that probability by eliminating format parts.”

AqVida’s team conceptualized an upgraded ratchet system that did not require formats. With individual vials worth hundreds of euros each, they also wanted a zero-loss concept, where a vial could “retrace its steps” through the line if any step of the process was incomplete (such as a stopper askew or missing crimp cap) to avoid rejects.

They were naturally drawn to the option of a robotic filling machine but were unable to find the right system. In some cases, robotic arms were too slow or required nested vials, while others were not commercialized. Still others offered the benefits of robotic arms, but still needed format parts. After speaking with and visiting several sources, they could not find a company that either had a line already or wanted to develop one together.

“We had almost given up, and asked several suppliers to send us a quotation for a conventional line—with ratchets and format parts,” says Mr. You.

Mirko Ebeling, Sales Director at Steriline, came to AqVida to present a quote for a conventional line. Mr. You informed Ebeling that they actually wanted a robotic line without any formats. “Suddenly he told us that Steriline wanted a project like that also, because Mr. Fumagalli, the owner of Steriline, wanted to design and build one.”

Members of AqVida including Mr. You went to Como, Italy, to visit Steriline’s manufacturing site.

“Right away, we were impressed by the isolators and the machines, which were well-polished… with top-notch welding,” says Mr. You. Beyond the machine quality, Mr. You notes the key was meeting Steriline’s owner, Gerardo Fumagalli, who described his passion and drive for designing and building the robotic line. “What tipped our decision was the fact that Mr. Fumagalli had acquired a company that specializes in sensor recognition and robotic programming. We saw from some other suppliers with conceptualized robotic lines that they had problems in this area. It was very convincing that he had the vision and knew what assets would be necessary for the task. And if the owner is committed, we thought, it is a safe bet.”

Development was a hands-on process, with AqVida and Steriline co-designing the line. The AqVida team brought its own robotic research to the table, and process and engineering teams from Steriline worked through rounds of development, figuring out how to include the parameters and features. “They never gave up. They stuck with the goal,” says Mr. You. “From the original sketch to the working machine took only two years.”

The result of the collaboration was the RVFCM50, a robotic vial filling and capping machine with an output of up to 50 vials/min (for 20-mL vials), that can handle vial sizes from 2 to 100 mL without changing format parts. In addition to the RVFCM50, AqVida selected a rotary vial washing machine (RA-V4), a depyrogenation tunnel (model ST2 CCS), and an external decontaminating machine (EDM-C).

The beauty of the robotic arms is best experienced in motion (video is available at AqVida’s YouTube channel). Vials travel through the following steps:

The vials travel in pairs throughout the process. But any missed step, for example a missing crimp cap, is retraced only by the vial that requires its cap. The vial that was successfully capped “waits” for the other to be capped and brought back before both vials continue to the next step together. “The sensors and robots… everything talks to each other,” explains Mr. You. “The robot stops if it’s bumped. The swivel motors know the force required to for each motion. If it takes more force than expected, they recognize this and stop.”

The robotic arms move below the height of the filling needles to avoid disruption of airflow. The line was designed to be as compact as possible to meet ISO 14644-1 guidelines that state that if an isolator is less than 2 cubic meters, only one sample port is needed. Glove ports were placed on either side of the machine to allow for complete access to the line.

Though it is not the fastest vial filler on the market, it is tailored to AqVida’s process for oncology and sterile parenteral filling, and will save considerable time and money. In a typical filling line, if a stopper is missed for any reason, that vial becomes a reject once it passes the stopper sensor. With robotic arms, the step can be re-executed properly and continue moving through the line, for zero rejects. (Mr. You notes that the final two vials, when the batch completes, are typically rejected due to insufficient fill weight). The company plans to perform compounding during the first shift and complete batch filling during the subsequent extended shift, which will allow them to avoid overnight shifts.

With cytotoxic drugs, operator safety is paramount. The line is encased in an isolator, and operator intervention is minimal. Once crimping is complete, vials are rinsed by purified water in an external decontaminating machine to minimize operator exposure.

In terms of cleaning, water for injection (WFI) steam is sent through the tubing to clean the tank, and then tubing is disposed after each batch. Though they are not typically needed, spray guns are available to spray water and compressed air into the machine.

Mr. You explains that AqVida designed the line so that it could be converted for single-use technology. For select oncology drugs and for antibody drug conjugates (ADCs) and monoclonal antibodies (mAbs) that are expensive, single-use could be a worthy investment.

AqVida is currently moving through the SAT, having completed the FAT in 2016. Mr. You says there are plans for ongoing upgrades, evolving the motion of the robots to increase yield. At present, the entire process from vial pickup through stoppering, capping, crimping to exit takes 2.5 seconds. “Even if we shave off 0.1 seconds, that’s a 4% yield increase,” he says.

Mr. You relates a positive experience working with Steriline. “They were fast, professional and designing with them was a good time. The head of robotics there, Alessandro Caprioli, was always creative with our requirements. When you buy a filling machine, you’re going to be with the vendor 20 to 30 years. It’s kind of a marriage.”

He says the critical message from his experience is that end users should realize they can help design machines, and they don’t have to settle for off-the-shelf technology. “It’s a shift in paradigm. Traditionally, it’s been, ‘Choose from these options and fit the process to the machine.’ Here we’ve made the technology and machine fit the process.”